Out next Friday 1st December 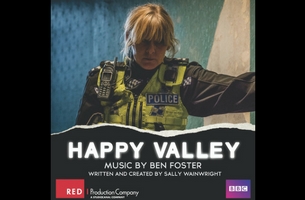 Composer Ben Foster’s soundtrack from Seasons 1 and 2 of the award-winning drama Happy Valley, written and created by Sally Wainwright for Red Productions and the BBC, will be released and available on iTunes and Spotify on Friday December 1st.

Featuring brutal synthesiser tones, guitars and scratchy strings the soundtrack is an unsettling listen that immediately puts the listener in mind of the show’s distinctive narrative and visual style.

‘Through this score I continually enhanced what the characters in the show were feeling – such as [protagonist] Catherine’s burning desire to bring Tommy to justice – with a ‘sound world’. The sound of this score is guitars, solo viola and lots of dirty, dark, fierce synth sounds from vintage synthesizers’. – Ben Foster

Ben Foster is behind the music for a large number of successful British TV series. Currently working on Season 3 of Our Girl for the BBC, Season 2 of Good Karma

Hospital and Season 3 of Thunderbirds are Go for ITV (co-writing the latter with his brother Nick Foster.) Previously, Ben wrote music for Torchwood, Scott and Bailey and Hidden Kingdoms. He has been nominated for BAFTA’s Best Original TV Soundtrack on four occasions.

He is also known for his work as conductor and arranger for over 100 episodes of Doctor Who and numerous film and game projects (most recently Jackie for Mica Levi, Wind River for Warren Ellis & Nick Cave, and So Let us Melt for Jessica Curry) as well as working with artists such as Peter Gabriel and Sir Paul McCartney.