comparethemarket.com's Meerkats Get Behind the Mask in New Spider-Man Ad 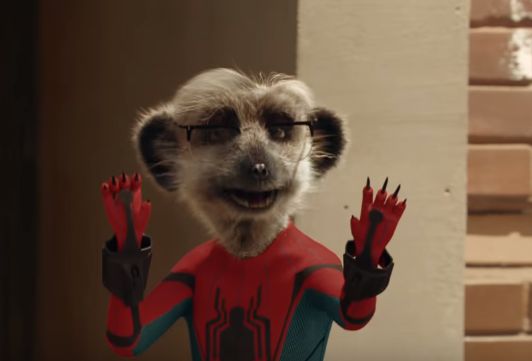 Ahead of Sony Pictures' summer blockbuster, Spider-Man: Homecoming, comparethemarket.com has launched a new multi-million pound, above the line campaign featuring Aleksandr and Sergei.

Following the successes of previous film partnerships including Batman V Superman and Star Wars, comparethemarket.com has teamed up with VCCP and Sony Pictures Releasing UK on a 30 second advert.

The new advert for Spider-Man: Homecoming is supported by a 360-marketing campaign, working with lead agencies VCCP Blue and VCCP Me, and is the first-time audiences will see meerkats, Aleksandr and Sergei, immersed into the film’s world, with the ad set in the Marvel Cinematic Universe. The TVC was directed by Dave Scanlon and produced by Steven Riley and Patrick Duguid at Passion Pictures, with additional visual effects executed by Method Studios, who also worked on the Spider-Man: Homecoming film. The advert, also supported by MEC, will be promoted via TV, VOD, radio, cinema and social video.

Mark Vile, Marketing Director at comparethemarket.com, said: “With the summer blockbuster season well underway, we’re thrilled to be partnering with this major film release. Working with the teams at Sony Pictures Releasing UK has further bolstered our Meerkat Movies proposition, allowing us to deliver unique and engaging storytelling to our audiences. Summer holidays can often prove expensive when it comes to keeping the family entertained, so we hope the benefit of 2 for 1 cinema tickets will be a welcome reward.”

Existing and new customers of comparethemarket.com have the exclusive opportunity to enjoy the new Spider-Man: Homecoming film with their 2-for-1 Meerkat Movies cinema tickets either on a Tuesday or Wednesday this summer.

Since launching Meerkat Movies over two years ago, over six million people have redeemed a code with comparethemarket.com, saving the UK over £45m by giving members the chance to enjoy two for one cinema tickets every week for a year.