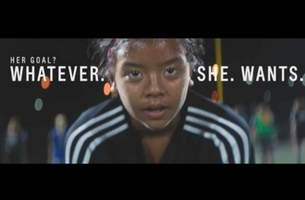 Commonwealth//McCann produced its latest campaign for client Chevrolet and Chevrolet FC in partnership with the Women’s Sports Foundation to encourage young women to stay in sports and empower them through mentorship to set goals that will help them fulfil their ambitions. The full campaign, titled “GoalKeepers,” was unveiled during the Manchester United match against Tottenham in Manchester, United Kingdom, on Sat, Oct. 28.
During development of the campaign, we utilised a core statistic to tell a modern success story – that 94 percent of female leaders played sports as a girl. “Girls who play sports are more likely to graduate from college, have successful careers and become leaders, which is why we have created our GoalKeepers initiative,” said GM Chairman and CEO Mary Barra. This powerful message is carried throughout the creative and is echoed by Billie Jean King, winner of 39 Grand Slam titles, 20 Wimbledon titles, Life magazine’s “100 Most Important Americans of the 20th Century” and founder of the Women’s Sports Foundation.
view more - Creative