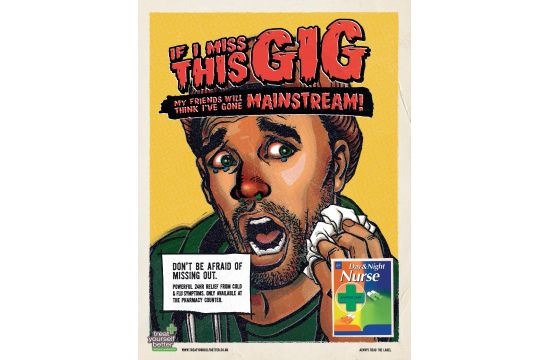 The campaign features six bold executions in Adams’ distinctive comic style, accompanied by punchy headlines revolving around the concept of ‘missing out’. One depicts a flu-ridden woman with the caption ‘If I miss this date, I’ll end up a lonely old cat lady!’. Each execution plays on the hyperbolic, overdramatic and all-encompassing feeling  of missing out that people – particularly the urban 25-40-something audience – feel faced with when waylaid by cold and flu.

It runs until the New Year and includes cover wraps in both Time Out and Metro Life & Style, high-profile placements in Shortlist and Stylist cross-track projections on the London Underground, targeting busy people – particularly professionals who ‘have to keep going’.

Adams’ 50-year career has seen him create some of the most iconic and definitive modern comic book imagery, particularly of DC Comics characters Superman, Batman and Green Arrow. He’s also co-founder of graphic design studio Continuity Associates and was inducted into the Will Eisner Comic Book Hall of Fame in 1998 and the Harvey Awards’ Jack Kirby Hall of Fame in 1999. His work on revitalising Batman, which he first worked on in the 1970s, serves as a prototype and inspiration for every illustrator of the character to this day.

Nick Rowland, creative director, Grey London, says: “Comic book-style illustrations are back in fashion but they haven’t yet been properly utilised in this category. This campaign is inarguably eye-catching and really sets Day & Night Nurse aside from its rivals. The fact that Neal – perhaps THE biggest name in comic book illustrating – was involved was a real bonus.”

The campaign was created by Erik Uvhagen and Johan Leandersson and creatively directed by Nick Rowland.