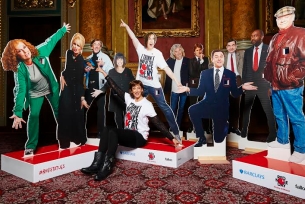 Comic Relief has launched a brand new way of giving to charity, designed by creative agency Fallon. Red Nose Day’s Donation Statues, with donation technology provided by Barclays, will appear around the country from today, as a fundraising initiative in support of Red Nose Day 2015.

Larger than life replicas of some of Comic Relief’s best-loved comedy supporters, designed by Fallon, and built by 3DEye, will be popping up across the country from 9th – 19th February. Simply tapping a debit or credit card against a statue's pocket will automatically donate £1 to Red Nose Day through the magic of Barclays contactless technology, or via the Barclays Pingit app. Givers are also encouraged to take a selfie alongside the statues to share with friends using #RNDStatues. With Barclays Pingit, you can also add an extra 25% on top of your donation with Gift Aid to help Comic Relief run itself, and it doesn’t cost you a penny.

Fallon’s involvement with the project began when the creative agency was awarded a grant from the Innovation in Giving Fund, managed by Nesta and funded by the Cabinet Office www.nesta.org.uk/project/innovation-giving-fund. The £10 million Innovation in Giving Fund, funded by Cabinet Office, was set up to support, develop and grow innovations that encourage people to give in a way that works for them – often using new forms of technology, people’s networks and hooking giving into people’s everyday lives.

Strategic planner, Joe Hedinger, the strategist behind this project, began working on a new giving concept while employed by Fallon. Inspired by the realisation that he hadn’t donated spontaneously to a charity in months, he wanted to create an interactive means of making charitable giving easy, fast and harmonious with urban lifestyles.

Comic Relief then came on board as the first confirmed charity partner for the project. Then Barclays, an official Partner of Red Nose Day, provided the contactless donation payment technology to make donating to Comic Relief simple and fun.

Fallon’s ambition for the concept will be to permanently alter the way people donate, and future-proof a culture of giving in the UK.