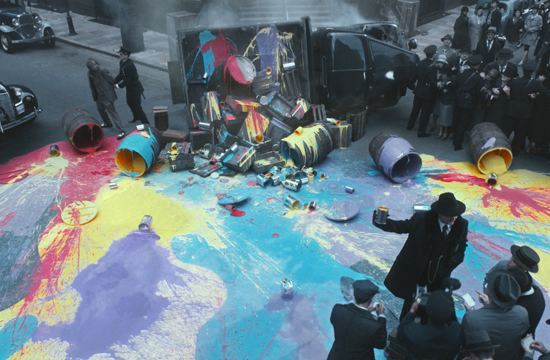 Leading paint manufacturer Dulux is launching an epic new campaign, created by BBH London, that imagines a world in which colour is banned. The new 60 second film will premiere across all channels in the Channel 4 network on Sunday 2 March at 9pm.

Based on the idea that our lives are stories and that colour can change the way they unfold, the new campaign adopts a more emotional approach than previous adverts. Taking stylistic cues from prohibition America, the film tells the story of a couple who find love through colour and demonstrates the transformative power that colour has on people’s lives.

Set in a fictional time when police enforced a ban on colour, the film begins as a flame haired young woman leaves her dull and grey apartment with her collar turned up and head held low, failing to notice the wave of her admiring neighbour. Following a gun-toting police chase, a van loaded with paint barrels ends up on its side and a rainbow of paint spills out over the street. She takes home an errant paint can and transforms her home with a tranquil teal. Adding colour to her home instantly begins to transform her life, opening up her mind to the possibilities of the world around her; she notices her neighbour’s wave and they quickly fall for each other.

Panning out over the city, it is evident that the red-head is not the only person who took advantage of wayward paint cans – people all over the city can be seen enjoying life in their newly painted rooms. The film ends with the line ‘Your Life Is A Story, Change It With Dulux’.

Shot in South Africa by award-winning duo Christian and Patrick, the epic story is brought to life by an array of filmmaking talent. Set and costume design overseen by Production Designer Richard Lassalle (Eminem’s My Name is Slim Shady) was captured on film by DOP Benoit Delhomme (Mark Herman’s The Boy in the Striped Pajamas).

Ann Marie O’Riordan, Head of Marketing for Dulux comments: “This is a turning point campaign for Dulux. It’s a real step-change in the way the brand is positioning itself within the category – moving toward a more conceptual approach that considers the emotional and transformational power of colour. It elevates our brand idea that colour can help change your story and is our most integrated campaign to date. We expect that the creative concept will become instantly recognisable and help us stand apart from competitors, aiding in our ambition to become the UK’s consumer’s go-to brand for all of their decorating needs.”

Nick Allsop, Creative Director at BBH London commented: “After the recession, and now the wettest winter ever, this film couldn't be more timely. It's message is simple - Dulux colour can change more than just your walls, it can change your whole outlook on life.

We wanted to splash that message across Britain's screens in the most memorable, poignant and filmic way possible. Hence we've written a mini-epic set in perfectly recreated period dress, shot by a Hollywood cameraman, around a 'high concept' idea - what if Prohibition had been about colour and not alcohol. Hopefully the results are dramatic, romantic and stylish enough to make people re-appraise the much-loved Dulux brand.”

Christian and Patrick, the directors, commented: “We loved the script and immediately knew we wanted to be involved. The central idea of a world stripped of colour seemed so evocative and we could imagine quite clearly how we could develop the story. Amy is quite emotionally affected by the loss of colour and is no longer able to appreciate the world around her. A flame inside her has gone out. We really immersed ourselves in this idea and worked with the creatives from BBH to make this grey world around her feel completely real and full of rich characters like the oppressive and slightly sleazy chief of police, or Ryan, a handsome young writer who lives just across the street. The story is a bit of a fairytale but our approach was to bring it to life in as visceral and cinematic a way as possible.”

The film forms part of the launch of a new integrated marketing strategy for the Dulux brand. The new approach was created by BBH London, with Digital by AnalogFolk, PR by Mischief PR, media buying by Mediacom and supported with in-store activations by Initials Marketing. The brand aims to bring to life ‘Change Your Story With Colour’ through a truly integrated campaign.

AnalogFolk will build consumer intrigue by removing colour from the Dulux social media channels (Facebook, Twitter and Pinterest) and the campaign landing page in the run up to the TV launch. The agency is responsible for extending the conversation online and delivering inspiration and engagement using #changeyourstory. The aim of the digital activity is to drive consumers to the Dulux UK website where they can order testers from the campaign palette.