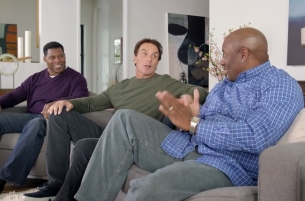 AT&T has launched a new advertising campaign to help bring to life the fact that it now has the nation’s strongest LTE signal.

The campaign, created by BBDO NY, launched during the college football playoffs and brings together some bona fide experts on strength including former Heisman Trophy winners Bo Jackson, Doug Flutie, Herschel Walker and NFL quarterback Joe Montana. They riff on what strength means to them.