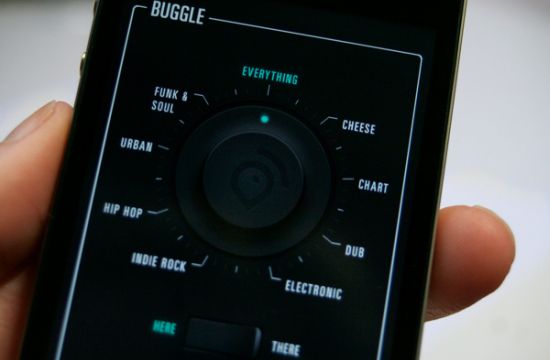 Collective London – the strategic-led creative digital agency with clients like Honda, BBC and EA – has developed a new app (image attached) and associated hardware that’s designed to make choosing your next venue on a night out easier than ever before.

Based on the consumer insight that people often want to find out what music is playing in nearby clubs and bars before making the decision to move, The Buggle lets users listen – in real time – to what’s being played by other venues’ DJs. ‘Live listening’ has been made possible through proprietary hardware called ‘The Buggle Box’, which sits within the DJ’s booth and links into ‘The Buggle’ app for iOS devices.

The concept came from rising digital star Sarah Buggle, a Hyper Island and Central Saint Martins graduate, who won the agency’s ‘Collective Upstarts’ competition: an initiative designed to nurture the next generation of creative and digital talent by turning their winning concepts into reality with Collective’s strategic, creative and development expertise.

Initially launching in London’s nightlife hotspot of Shoreditch, the app displays all locally participating bars conveniently as pins on a map, with users tapping on the pins to listen to what music is being played. Users are also able to filter clubs and bars according to music genre, as the app uses last.fm’s song recognition technology to sort tracks into one of eight musical categories. The Buggle additionally taps into social media by allowing users to share their chosen venue, including the relevant audio clip, across Facebook, Twitter, email and SMS.
Nine months in the making, ‘The Buggle’ was developed in-house by Collective and is based upon a custom-programmed Raspberry Pi enclosed in a bespoke case printed on the agency’s 3D printer. All technical and software development was completed by Collective’s Senior Developer Gareth Williams, while Danny Blackman, Senior Designer, led the design of the brand and its associated app.  The agency has also supported Sarah Buggle with strategic insight provided by Bianca De Sousa (Junior Planner) and guidance from the agency’s senior management team.

The Buggle will officially launch in beta on May 20th 2013 at the opening of the Digital Shoreditch annual tech festival. The app will be available for iOS platforms and is free to download.
Collective’s CEO, Nick Constantinou, said: “When Sarah submitted her idea as part of our Upstarts competition, we instantly knew it had legs. It’s not often you come across something that’s refreshingly simple but based on a genuine consumer insight. An idea like this is an intelligent and elegant solution to a real human problem; the sort of work we passionately believe in. We’re so pleased Sarah entered the Upstarts competition and are looking forward to helping her develop The Buggle on a national scale.”

Sarah Buggle, the brains behind the concept, said: “When I was studying at Hyper Island’s UK base in Manchester it wasn’t easy to find out what was playing around the city’s clubs. Frustrated by the obscure DJ names and genres on club posters, I realised we needed an alternative – a live audio flyer. When I saw Collective tweet about their Upstarts competition, it seemed too good to be true. But they have helped me bring my idea to life and I’m truly grateful. Exciting times ahead.”

Kam Star, Founder of Digital Shoreditch, added: “It’s encouraging to see so much young talent from the UK bringing start-ups such as The Buggle to the technology scene. Our mission at Digital Shoreditch is to attract and connect the latest talent and brands in the East London community with each other, and to the rest of the world.”
Collective London is now looking forward to finding the next Buggle when students from all around the country vie for the next Collective Upstarts program by pitching their ideas on 2nd July 2013.  Interested parties should contact Antonia Katsambis at Antonia.Katsambis@collectivelondon.com for more information.