Colin has produced work for a diverse range of brands such as Jack Daniels, Volvo, Travelocity, Eurostar and HSBC 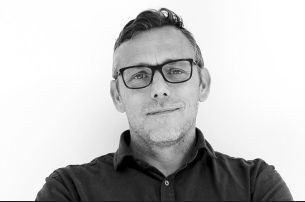 Building on a number of recent senior hires, Iris Amsterdam is continuing to grow its strengths with the appointment of Colin Lamberton as executive creative director.

Colin has over twenty years of experience, which has seen him work in London, Amsterdam and Prague. Having started at Lowe in its 90s heyday, he spent time at hot-shop Chiat/Day, where along with his colleagues he became a founder of co-operative agency St. Luke’s, and later his own experimental studio, Ether.

During this time Colin has been creative director on work for a diverse range of brands such as Jack Daniels, Volvo, Travelocity, Eurostar, HSBC, Radio One and Evian. His belief in using an unexpected approach to change ingrained behaviour is evident in much of his work including the early Eurostar ‘Cantona’ commercial, renowned ‘Gremlins’ Adult Literacy campaign created for the British Government, and the controversial Baked project for Stussy x Freshcotton.

“We’re delighted to have Colin join Iris Amsterdam,” Chris Friend, managing director at Iris Amsterdam commented. “Colin represents the kind of creative thinking we thrive on. He’s world-class, progressive and truly for the forward. He is a key part of our growth strategy and I’m already loving working with him. Bring on 2019!”

Grant Hunter, Iris Europe’s executive creative director added: “As a network we are committed to pushing our client's business forward using our special blend of creativity. Colin is a brilliant thinker who will help us realise the massive potential of our Amsterdam office. We're super excited to have him onboard.”

Iris Amsterdam’s executive creative director, Colin Lamberton said: “I’m inspired by the weird and the wonderful and Iris Amsterdam fits that just fine – it’s an ambitious agency that isn’t afraid to do things differently and take its clients into more compelling territory. Being part of a future-forward, creatively-focussed organisation is something that definitely tickles my fancy and I look forward to annoying and infuriating everyone in pursuit of bold ideas.”

Colin’s appointment follows the recent addition of Lennard Hulsbos as director of Iris Concise, the agency's strategy and consultancy arm, and a new head of studio, Michael Dooling. This move to reinforce the senior team at Iris Amsterdam is in line with the agency’s investment and growth strategy for 2019 and beyond.