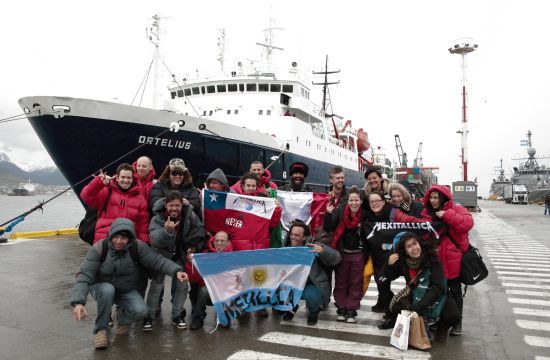 The 19 winners of the promotion conducted by Coca-Cola Zero in Argentina, Chile, Colombia, Costa Rica and Mexico are already aboard the ship that will take them to Antarctica to be part of “Música Zero”, a cultural event that will feature Metallica playing its best music for the first time in the White Continent.

The group sailed from Ushuaia, the southernmost city in the world. There they received all the necessary information to take the 10-day trip through the imposing Antarctica scenery.

“Música Zero is a dream which began in June 2012, but it is only coming true today. We were looking for a completely different idea that would embody Coca-Cola Zero’s philosophy of making possible the impossible. A unique and innovative musical event staged in the last frontier; an opportunity for people to show their potential and participate directly or through streaming in an exclusive concert with one of the most important bands in the whole history of rock. With "Música Zero", Coca-Cola Zero becomes consolidated as a beacon of possibility," said Diego Luis, Coca-Cola Zero Senior Brand Manager for the South America Region.

The expedition will take place on board a private cruise ship, especially designed for polar trips and part of the Dutch fleet of Oceanwide Expeditions, which has been operating in Antarctica since 1991, a member of the International Association of Tour Operators (IAATO).

A GREAT CONTINENT
In the south of the world a unique land opens up, full of mysteries and challenges: Antarctica. It is the sixth continent, the fourth largest in the world, with an area of around 14 million square kilometers. It is a desert with permanent ice and marine currents which cool down the planet.

It is the highest continent with elevations of over 2000 meters above sea level, the windiest, with gusts of up to 200 km per hour, and the coldest with a mean annual temperature of -51°C. It is also the land of friendship, the most successful case of international cooperation with harmony reigning among over 48 countries. They are all committed to conducting scientific research, to studying nature under extreme conditions as well as the evolution of life on Earth, since trapped in the ice there are meteorological data that show us the history of the world. Every year, thousands of scientists travel to the 60+ Antarctic bases to try to understand this secret world.

Antarctica is under the special stewardship of the Antarctic Treaty and several international forums which, among other aspects, contemplate the possibility of promoting cultural actions to disseminate awareness on the importance of this continent, to safeguard Antarctic biodiversity and as an example of international cooperation.

The “Música Zero” activity has complied with the Environmental Impact Assessment, audited by the Environmental Management and Tourism Program of the Argentine National Antarctic Directorate, following the guidelines of the Antarctica Protection Protocol (the Madrid Protocol).