The team behind the sexually-charged film opens up to LBB 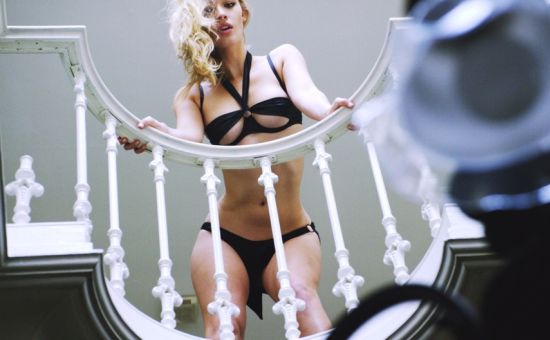 In a quest to engage people in a more liberated conversation around sexual desire, high-end British sex store Coco de Mer has teamed up with TBWA\London, Rankin and a whole host of other photographers and directors, including Vicky Lawton, David Allain, Damien Fry & Joe Hunt, Trisha Ward and Bronwyn Parker-Rhodes, to launch ‘X’. Created by TBWA creative director Walter Campbell, the concept immerses viewers in a visceral journey  through out darkest desires. Rankin and co.’s touch keeps it sexy while also exploring some edgier, abstract ideas. On a simpler note, though, it’s two-and-a-half minutes of compellingly beautiful fashion filmmaking. LBB’s Addison Capper spoke with TBWA’s Campbell, directors Rankin and Vicky Lawton, and Coco de Mer managing director Lucy Litwack to find out how they pulled it off.

LBB> Strategically, what is Coco de Mer’s aim with ‘X’ and what were the themes that you really wanted to explore?

It's about heightening the appetite, abandonment of inhibitions and total immersion. The medium of film is the ideal way to portray our brand message as it is engaging and exciting and takes you on a journey that still media would struggle to emulate. You immerse yourself in the experience and make your own discoveries during the process.

Having the opportunity to work with such hugely talented creatives as Rankin, Walter Campbell and the rest of the team allowed us to truly reach the limit of our own imaginations - a passionate and thrilling collaborative journey which resulted in X.

We really hope this campaign will pave the way for more conversations around desire and eroticism.

LBB> What was the initial brief like from Coco de Mer and what were you thinking when you first saw it?

WC> There was a cool creative collaboration in which we delved into some concepts that are interwoven into the film. Coco de Mer really do invest in what they do, and it’s that attention to detail that elevates their product and ambition. It was that ambition that really was the starting point for the campaign; how to evoke wilder possibilities from a seemingly dormant or ambient starting point and breathe life into these abstract thoughts.

LBB> Rankin and Vicky, what was it about the concept that initially appealed to you?

R> The initial appeal was working with Walt. He is a legend in the industry. I will always move mountains to work with him.

VL> The appeal for me was to work on a creative project with Walter Campbell – who I knew had an idea that could be very exciting to execute.

LBB> As directors, what were your aims for the film?

R> I wanted to capture that feeling of consuming imagery but amplified and voyeuristically.

VL> I wanted to create a series of images that could pull the viewer in, mesmerise and hypnotise in just a moment. Each shot needed to have the power to stand alone, but still as a collective have the energy and attitude to work together. Most importantly, I wanted the film to be alluring and provocative, but the women involved remain powerful and in control.

LBB> The whole idea is about encouraging a more liberated view on sexual desire – Walter, what was your starting point when developing the concept?

LBB> How much involvement did Coco de Mer have in the concept development?

LL> This was very much a collaborative process. Walter Campbell at TBWA came up with the initial concept and then together with us and Rankin, it became a truly exciting collaboration. At Coco de Mer, we believe that the next beautifully enthralling moment is always waiting to happen – the ultimate erotic experience of your life is yet to come. We want to make these experiences exciting and enriching – for us, sex is a very beautiful thing and we want to celebrate our enjoyment of each other. We wanted to ensure every element of the brand evolved to reflect these ideas. Working with TBWA and Rankin allowed us to explore this concept further, and I had total faith in their understanding of our brand. The end result, X, emphasises this for us in the perfect way and with this campaign we hope to pave the way for more conversations around desire and eroticism.

LBB> There’s the age-old adland saying that ‘sex sells’, but rarely do you get to explore sexuality in advertising – especially in the complex, quite dark way that you have with this. How was it for you, as a creative, to be let off the leash?

WC> When sex is used to sell it is so often a fleeting moment in which a notion of interest lands and departs in that brief ethereal beat. The opportunity to make something that impacts on the imagination isn’t as simple as it might seem. I think the lyrical sweep of this piece and the multiplicity of images and the myriad suggestions do intrigue the mind in a more complex and lasting way.

LBB> ‘X’ is incredibly visceral - how did you go about developing the various ‘scenes’ within the spot?

R> Walt gave us loads of scenarios and ideas, but we all went away and came up with things ourselves. We had lots of references and mood boards, but the idea was always to turn it on its head and do it differently, your own way and then twist it.

That’s what Walt does; he twists everything and encourages you to as well.

VL> I developed mood boards for each shoot I directed, mapping out the set ups I wanted to create and the styling/attitude for each moment based on Walter’s initial brief. He would then twist each idea so it was pushed and developed into a new way of thinking, which was very rewarding for me as both a creative and a director.

LBB> The film is really beautiful, but it also has a bit of a dark, edgier tone to it. Why was it important for your brand to portray the themes like that?

We believe sex is a very beautiful thing and we want to celebrate our enjoyment of each other. Even the edgier elements are beautiful in their own way.

LBB> As directors, from where did you draw inspiration for those darker tones?

R> God, everywhere, but mainly from our imaginations. But it’s impossible not to be influenced by things you see – even subconsciously.

VL> I’m a blog enthusiast – so a lot of my references are ones I’ve had on archive for a while, and been looking for the right project – or I’ve spent a bit of time researching the mood that felt right. Walter had a clear tone for the film from the beginning, so I followed his lead in that respect.

LBB> The film is edited at a really fast pace – what was the thought process behind that?

WC> The pace and weave of the film is absolutely key – it grows and subsides with the relentless sweep of waves and it is a big element of the film. This visceral feeling is created by the flood of images and impulsive beats. So much of the feeling is created by the interaction of these two components and luckily the editor Nick Gilberg also arranged the music, so the weave is more potent because of his discipline. It permeates the whole piece to such a degree it really affects people.

VL> Nick and Walter made a film for our generation. It was about the fast paced energy which could maintain the attention spans of this age.

LBB> 50 Shades has really pushed sexual exploration into the mainstream - being a high-end brand, what effect has the saga had on Coco de Mer?

LL> There is always going to be a proportion of people who fear the erotic. However, books and films such as Fifty Shades of Grey have opened up this arena to a much wider audience and almost legitimised the experience. Therefore, you have a greater number of people who want to experiment and explore their desires in a way that perhaps they felt unable to do in the past. This has an effect on us as much as it has on mainstream brands. Customers are more open to experimentation and to delve deeper, more quickly, into their desires. At Coco de Mer, we can make that experience enticing and special.

LBB> What was the trickiest aspect of this project and how did you overcome it?

WC> I think the trickiest component is to measure that stirring suggestive energy, so that the viewer feels and thinks about the balance of everything in this piece.

R> I think it’s always going to be tricky working with a large group of creatives. There’s always going to be somebody that’s pissed off about something. I think we chose a group that could deal with that element of it and weren’t too precious about it. We all had to deal with not getting our own way in the edit. That’s always tough, but in this case that was the deal going into it – even for me.

VL> Letting go – I usually oversee the edit on most of my projects, so that was hardest for me. But with Nick and Walter I knew the footage was in capable hands, and they would see moments that I may not have initially chosen.