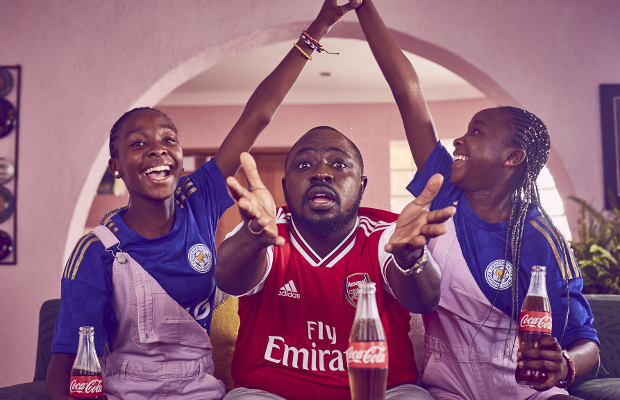 Coca-Cola is leveraging its sponsorship of the English Premier League with an integrated campaign currently running in Nigeria, and created and implemented by the soft drink’s marketing partners on the continent including FCB, Isobar, Dentsu, Ogilvy Nigeria, Town Criers and R&B Public Relations.

The company’s IMC director, Monali Shah, tasked FCB to engage the myriad EPL fans in Nigeria in a refreshing and unexpected manner to ensure they’d ‘offer Coca-Cola a seat at their table’ during this year’s season.

“In Nigeria, football is not just a game, it is a way of life,” she said. “The fans here live the EPL seven days a week, not just on match days. Coca-Cola wanted to honour these fans and their passion for the game every day, not just during the 90 minutes of play.

“The big ask to the agency was to ensure that the brand stood out in the sea of EPL communications and to create a campaign that resonated with the fans and invited Coca-Cola to become part of their conversations,” she explained.

An integrated campaign featuring a TVC, social executions, PR, out-of-home, shopper activations and customer partnerships, it speaks directly to the passion of the fans, who constantly banter with each other about the league, the teams, the performances and the statistics.

According to Suhana, the insights informing the creative approach are grounded in West African fans’ special relationship with the league’s clubs.

“The key difference between a West African fan’s relationship with the club he or she supports and that of a fan in the UK is ‘choice’. In the UK, you don’t choose your club, you are born into it. For this reason, if someone disrespects your football club, they disrespect your place of birth, your home, your family. As a result, there’s an aggressive, territorial undertone to football banter and discussions.

“By contrast, in West Africa, they choose who they support, and are drawn to a club by its popularity and performance. Banter is, therefore, friendly and sporting – a passion point. What’s more, banter, in the West African EPL context, brings people together. Never aggressive, it is a way of good-naturedly sharing your knowledge of the game, and building anticipation for the coming weekend’s battles on the pitch.

“And yeah, while what happens on the pitch is fair banter fodder, that’s where the battle stays … on the pitch,” she quipped.

The TVC was directed by Anton Visser of Patriot Films with post-production from Left Post. Tiger Fight composed the soundtrack. The campaign broke in Nigeria in December 2019.