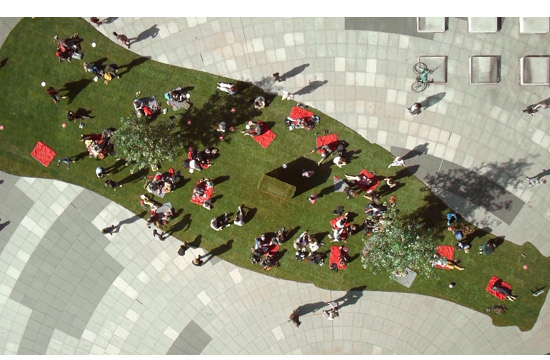 Coca-Cola today launches Roll Out Happiness, the latest global installment in the brand’s ‘Where Will Happiness Strike Next?’ series. Striving to make our cities and lives a little less gray, the film shows what happened when Coca-Coca rolled out a lush, green park and opened happiness in an unexpected location.

Gray, grau, gri, グレー, šedá – whichever way you say it, the dullness of gray is an all too present fixture for those of us who live in concrete heavy urban cities. To bring people together and help them cast aside their worries to enjoy the moment, Coca-Cola made one spot a little less gray by transforming a drab city square with a pop-up park.

Created with ad agency Wieden+Kennedy Amsterdam, the Roll Out Happiness film depicts the grass being physically rolled out by Coca-Cola’s customized grass-laying vehicle, with surprised passersby looking on as the park takes shape. Bringing people from all walks of life together (and even their dogs) are trees brimming with fun equipment to play with and two special vending machines. With nothing but the instructions to “Take Off Your Shoes To Open Happiness” - the vending machines rewarded those who did with not only the feeling of fresh grass underfoot, but a refreshing bottle of Coca-Cola.

Christy Amador, Coca-Cola Global Digital Brand Strategist, says: "This is one of my favorite "Where Will Happiness Strike Next?" executions.  The concept is so simple, yet uplifting – It perfectly demonstrates our strategy – and you can't help but smile as you watch it!"