Created by FCB&FiRe, the anthem aims to connect and awake passions in football fans in the lead up to the event 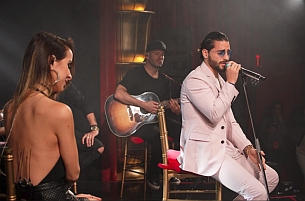 Coca-Cola presented its anthem for the World Cup with a Maluma show produced by FCB&FiRe US-Hispanic in Miami.
The song was presented at the Faena Theater in front of 45 Latin American journalists, influencers, industry executives and fans.
Coca-Cola presented its anthem for the 2018 World Cup Russia, “Colors,” a theme that seeks to motivate the entire world in the face of the most popular sporting event on the planet. Jason Derulo is in charge of reflecting the values ​​of optimism and inclusion, in an effort to unite people.
The version of “Colors” for Latin America included a luxury interpreter, Maluma, who premiered the song on March 14 at the Faena Theater in Miami. The event featured the production of the local US-Hispanic office of FCB&FiRe. The event was followed by fans via live-streaming on Coca-Cola’s social networks and numerous local media sites, breaking audience records with 2,518,000 people from 22 countries in the region connected in real time from their smartphones, tablets, computers and SmarTVs.
“We know that the FIFA World Cup is one of the most important cultural and social events on the planet,” commented Guillermo Giménez y Brotons, director of communications for Coca-Cola South America. We believe that music – like football – awakens passions in people, and with this anthem, we continue to strengthen the bond of Coca-Cola with sports, and as a brand that always seeks to be close to its consumers.”
Coca-Cola has a long tradition with professional and amateur football, both globally and locally, maintaining a historical relationship with FIFA and local football associations. The company has accompanied the FIFA World Cup championships through its advertising presence in the stadiums since 1950, and has been the official sponsor of the World Cup since 1978.
Once again, Coca-Cola becomes a brand that generates unique experiences for its consumers, with innovative proposals that allow the company to always be close to people.
view more - Creative