Coca-Cola Orchestrates the Cutest Ode to Joy You'll Ever Experience 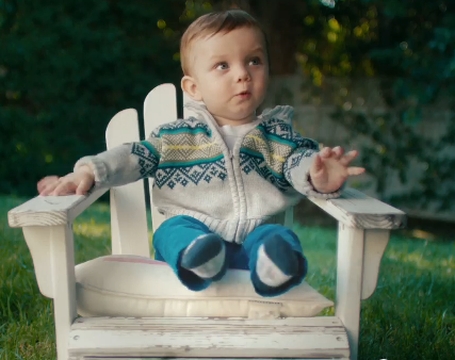 The Coca-Cola Company, in partnership with (RED), invites Brits to join a global movement to help end mother-to-child transmission of HIV with the launch of a new campaign, titled “SHARE THE SOUND OF AN AIDS FREE GENERATION”.  The campaign will feature an array of top artists as they debut new music, and offer exclusive experiences encouraging people to come together, to share, and most importantly—to give. Funds raised from the campaign will go directly to The Global Fund to fight AIDS, Tuberculosis and Malaria to finance grants which provide HIV prevention, testing, counseling, treatment, and care services.

The month-long global program which runs through to World AIDS Day on December 1st, 2014, shares a message of hope and unity to empower today’s youth to understand they can be the generation to end the AIDS crisis. 650 babies are born every day with HIV, yet life-saving medication exists and costs as little as $.40 a day (25p).  That same medication can reduce the risk of an HIV-positive woman passing on the virus to her baby by 95%. In 2013, for the first time since the discovery of the virus, more people were newly added to treatment than were newly infected with HIV, a critical milestone in reaching the beginning of the end of AIDS.

“One of the primary goals behind the movement of this campaign is to use the power of music to rally the millennial generation in realising that an AIDS free world is within reach,” said Emmanuel Seuge, Vice President, Global Alliances & Ventures, The Coca-Cola Company.  “We are grateful to all of the artists who are joining us in this remarkable effort.”

The campaign kicks off with the debut of Queen’s “Let Me in Your Heart Again,” a previously unreleased song, mixed by William Orbit exclusively for the (Coca-Cola) RED campaign.  The song features the iconic vocals of the late Freddie Mercury, who passed from AIDS in 1991. Each week, a new artist will unveil an original song which will be available to download on iTunes with proceeds benefitting the Global Fund at www.iTunes.com/REDSound. The tracks include:
· “Let Me in Your Heart Again” (William Orbit Mix) by Queen featuring Freddie Mercury (Week of November 3)
· “Together” by Aloe Blacc (Week of November 10)
· “Divine Sorrow” by Wyclef Jean featuring Avicii (Week of November 17)
· “I Lived” (Exclusive Remix of Original Single) by OneRepublic (Week of November 24)
“It’s been 23 years since the world lost our beloved Freddie Mercury,” said Queen guitarist Brian May. “We’ve made extraordinary progress in the fight against AIDS in that time. But we cannot simply rest on the fact that the treatment is available. We must ensure that it is provided. Roger and I are proud to lend this rediscovered song to the (Coca-Cola) RED campaign, in the hope that Freddie’s powerful voice can inspire the world yet again.”
Unique Experiences
Coca-Cola and (RED) have partnered with OMAZE, a leading fundraising platform that specialises in offering once-in-a-lifetime experiences that require fans make a donation to secure a chance of winning.  By visiting omaze.com/CokeRed, fans in GB will be able to take part in this global initiative and donate to be in with the opportunity to win incredible experiences, including:
· Go Backstage with Bono and Win his Guitar: Get flown to a U2 show where Bono will give you his custom (RED) Gretsch guitar and sign it for you backstage.  (Omaze.com/Bono)
· The Ultimate EDM Year of Your Life:  Avicii has designed his own special experience for a fan to win tickets to three of the biggest music festivals in the world and ultimately join Avicii on-stage in Las Vegas next year. (Omaze.com/Avicii)
· On-Stage with Queen + Adam Lambert: Queen and Adam Lambert are inviting two fans to sit on-stage for their concert at the O2 Arena London. They will also be given a VIP tour of Queen’s legendary recording studio in Montreux, Switzerland. (Omaze.com/Queen)
· Live Like OneRepublic for a Day: OneRepublic has also created a fundraising experience where a lucky fan can spend the day with the band and enjoy VIP access to a show. (Omaze.com/OneRepublic)
The Coca-Cola Company is dedicated to the fight to end HIV/AIDS. Since 2006, The Coca-Cola Company and its foundations have committed over $15 million in the fight to end AIDS through awareness, education and prevention.  In 2011, The Coca-Cola Company initially pledged $5 million to the Global Fund  through partnership with (RED) and has recently raised its commitment by an additional $2 million donation directly to the Global Fund. This year, Coca-Cola will leverage the size and scale of the system to rally for the cause, ultimately activating this campaign in over 40 countries worldwide including Great Britain.
"Incredible things have happened in the fight against AIDS, bringing the pandemic to a tipping point. There is much to celebrate, but we must also renew our vow to wrestle this virus to the point it becomes part of our history not our present, said Bono, (RED) co-founder. (RED) partners like Coca-Cola are on (RED) alert this World AIDS Day to keep the pressure up, with the help of longtime AIDS activists Queen, and musicians Avicii, Deadmau5, Wyclef Jean, Aloe Blacc and OneRepublic.  Music fans have been a real army in the fight against AIDS, we hope this campaign will swell the ranks.”
view more - Creative