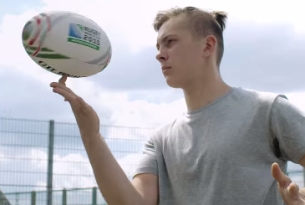 Coca-Cola Great Britain is today launching its Rugby World Cup 2015 campaign as it looks to excite the nation ahead of the Tournament later this year and show how much fun can be had with a rugby ball.

As official soft drink, water and sport drinks supplier of Rugby World Cup 2015, Coca-Cola is kicking off its activity by releasing an inspirational film featuring two Rugby World Cup winners; 2003 England hero Jason Robinson and Natasha Hunt, part of the victorious 2014 England Women’s Rugby World Cup side. Shot in a variety of settings far removed from those traditionally associated with the game – including Brighton Beach and Mile End Skate Park – the film sees Robinson and Hunt explore the magic of the rugby ball to demonstrate how anyone can pick up a ball and play.

At the heart of the campaign will be Coca-Cola’s biggest ever rugby on-pack promotion, giving consumers across Great Britain the chance to win one of up to one million exclusive Rugby World Cup 2015 Coca-Cola Gilbert replica rugby balls. The size four limited-edition rugby balls are great for everyone, from beginners to rugby fans, from families to friends, and perfect for playing in the park.

To be in with a chance of winning, consumers will need to look out for a promotional pack (across all four Coca-Cola variants on 1.25l, 1.75l, 4 x 1.5l, and 6 and 8 packs of 330ml cans) and enter the 10 digit unique code at www.winaball.co.uk to find out instantly if they are a winner.

To support the on-pack promotion and ahead of rugby fever gripping the nation later this year, a TVC will roll out to support the campaign in the coming weeks and run alongside out of home advertising.  Both will reflect the new one brand strategy, with Coca-Cola Zero leading a campaign that will feature all four Coca-Cola variants.  This will make Rugby World Cup 2015 the first time that Coca-Cola’s sponsorship of a major international sporting event will promote all four variants and lead with a no-sugar option.

Alongside the ball giveaway, the brand will be putting on hundreds of free, rugby-inspired activity sessions in six cities across the country throughout the summer as part of its ParkLives programme. From touch, tag, rugby-fit and even rugby-inspired dance classes dancing, ParkLives will be offering sessions for everyone.

Away from parks and green spaces, Coca-Cola is also working with its charity partner StreetGames to put on pop up street rugby sessions in every host city for the Tournament. Through the sessions which will be put on through StreetGames doorstep sport programme, the partnership hopes to engage a wider audience with rugby.

Paul Dwan, General Manager of Coca-Cola’s Rugby World Cup 2015 team, commented: “We want to use our sponsorship to help take the sport of rugby to an even wider audience, hopefully inspiring people to get involved in the Tournament and have some fun. Our biggest ever rugby on-pack promotion will put up to one million balls into the hands of consumers across the country, giving them the opportunity to try the sport like never before – whether that’s through our ParkLives programme, partnership with StreetGames  or in the garden or park with family and friends.”