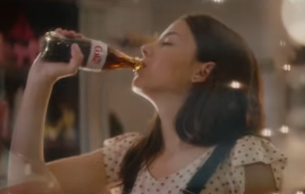 Since the 1930s, Coca-Cola has been synonymous with the holiday season. From heartwarming ads and special-edition packaging to the Coca-Cola Holiday Caravan stops that bring holiday happiness to communities across America, Coke and the holidays go hand-in-hand.

To embrace and celebrate the spirit of the season in 2016, Coca-Cola is shining a light on “unsung heroes”– those who go the extra mile to make the holidays more special for those around them. A new 30-second TV commercial, titled “A Coke For Christmas,” follows a teen as he wheels a cart of ice-cold Coca-Cola through his neighborhood, sharing bottles of delicious refreshment with merry-makers working hard to create a festive season and wonderful memories. From a man hanging holiday lights to a mom tirelessly preparing a holiday meal, each recipient is surprised by the unexpected token of kindness. The final bottle of Coca-Cola is saved for a visit from one last holiday hero: Santa Claus. Coca-Cola developed “A Coke For Christmas” with SRA Rushmore – Madrid.

The brand is also encouraging teens across America to showcase the different ways they step it up during the holidays through a #WeSleigh social campaign. Through it, fans can interact, share their holiday photos and recognise fellow teens.

For a limited time, Coca-Cola will pair its logo on product packaging with iconic and beloved symbols of the holiday season. The brand’s famous polar bears will be featured on holiday packaging of Coca-Cola, Coke Zero and Diet Coke, including 12-ounce can multi-packs, 20-ounce bottles, 1.25-liter and 2-liter bottles, as well as 12-ounce can multi-packs, 20-ounce bottles of Coke Life and 8.5-ounce aluminum bottles of Coca-Cola.