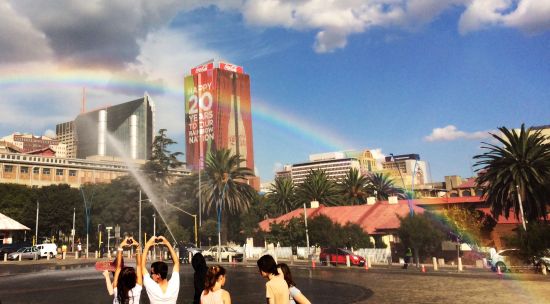 In April 1994, Archbishop Desmond Tutu coined the phrase ‘Rainbow Nation’ 20 years ago when South Africa experienced its first democratic election. During the month of April 2014, in celebration of ‘Freedom Month’, Coca-Cola literally created rainbows to mark the 20th anniversary of South Africa’s democracy and the birth of the “Rainbow Nation”.

Using sunlight, water, some fancy science and a little bit of magic, the rainbows were conjured up in the Johannesburg CBD by advertising and marketing communication agency FCB Johannesburg and a technical team led by a globe-trotting rainbow-maker from the United States.

“We are very excited to have discovered a way to create actual rainbows by capturing the sun at specific angles through a mist of recycled water,” says Sharon Keith of Coca-Cola South Africa.

“In the lead up to Freedom Day, we wanted to go further than reminding South Africans of our heritage. We wanted to create a symbol of our diversity and celebrate the fact that as a nation we have come so far. Coca-Cola aims to inspire moments of optimism and happiness, and rainbows can do both,” explains Keith.