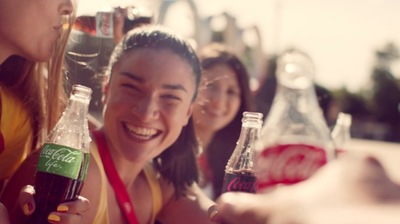 As the clock ticks down to the Opening Ceremony of the Rio 2016 Olympic Games, Coca-Cola has launched a new Olympics campaign via Ogilvy Sydney designed to highlight golden moments both on and off the podium.

To mark the 88th year of this partnership in style, Coca-Cola is encouraging Australians everywhere to come together, celebrate and share their own special '#ThatsGold' moments and get into the Olympic spirit as part of a major multi-channel marketing campaign.

The campaign will show that uplifting #ThatsGold moments happen in all our lives, just as they're happening to our Olympic Athletes competing in Rio as they strive for gold. To bring the campaign to life, Coca-Cola has announced Australian hurdling sensation and Olympic medal hopeful Michelle Jenneke as a #ThatsGold ambassador in Australia. Jenneke was selected for her well-known positive outlook and ability to bring her personality her sport.

In her role as ambassador, Jenneke will play a prominent role in a high-impact marketing program that Coca-Cola will be running to support the campaign locally and also globally in the coming month. Jenneke will be a face of a new TV ad to promote the Olympics campaign and will also engage in PR and social media activity to encourage Australians to share their own #ThatsGold moments and get behind Australian athletes. There will also be additional proximity out-of-home advertising and tailored digital activity.

Special limited edition Olympic collectors packaging is now available in market across 375ml packs of Coca-Cola, Coca-Cola Zero and Diet Coke, as well as 600ml packs of Diet Coke and Coke Life. There are six variations of designs on the 375ml cans (sold in 30 packs only), while on the 600ml bottles there are four designs per variant (sold in

Says Romy Mueller, brand manager, Coca-Cola: "Coca-Cola and the Olympic Games share many key values that make us so compatible. The gold medal is an icon of Olympic success and our #ThatsGold campaign goes one step further by taking that gold feeling beyond the podium, bringing people from all walks of life together to celebrate everyday moments that inspire us all. The campaign is one of our biggest Olympic campaigns to date and we hope to bring Australians together to make the most of the big occasion."

Alongside Jenneke, Australian superstars Cody and Alli Simpson have been enlisted as key influencers to support the campaign on a global level. They will be contributing a range of content in the lead-up and during the Olympic Games that defines what #ThatsGold means to them, encouraging their substantial social media following to celebrate their own golden moments.

The siblings will also be involved in the Olympic Torch Relay, with Coca-Cola the presenting partner of the Olympic flame on its journey through Brazil. 2,400 Coca-Cola torchbearers were chosen based upon the inspiring work they have done in their communities and for the gold spirit with which they bring people together. One of these torchbearers is Tasmanian teenager Geoff Papi-Watson who was selected as a result of his extensive volunteer work with the Happiness Cycle, a national community engagement program developed by Coca-Cola.

Another key pillar of the campaign's content strategy is a partnership with Storyful, a social aggregation service, to deliver relevant and real-time "That's Gold" local and global content to Australian households. Meanwhile, The Coca-Cola Olympic Station will be an activation that Coca-Cola is launching for the first time in its Olympic Games history. It will see the brand create an official 'must see' hang out for teens in Rio where they can experience and engage with the Olympic Games on their terms. This will give fans the chance to experience #ThatsGold in a number of ways, from innovative tech activities to headline events with their idols.

Coca-Cola has a proud history of being the longest standing partner of the Olympic Games, dating back to the 1928 Games in Amsterdam. The successful relationship between the Olympic Games and Coca-Cola is founded on shared values of participation, friendship, inclusion, respect and togetherness.
view more - Creative