The new campaign features three spots, two for Coca-Cola from McCann and one for Sprite from W+K 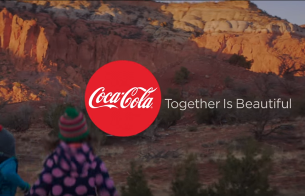 Tonight marks two “firsts” for The Coca-Cola Company. Coca-Cola’s One Brand strategy will be in the spotlight this year, with Coca-Cola, Coke Zero and Coca-Cola Life together as one portfolio offering for the first time during a Big Game broadcast. The ad, called “Love Story,” reinforces to hundreds of millions of viewers that an ice-cold Coca-Cola is a refreshingly delicious complement to any meal and underscores the Company’s commitment to the global One Brand marketing strategy in the United States. On America’s biggest advertising stage, the ad will help drive further awareness for the Coca-Cola portfolio’s low-and-no calorie options and variety of small package sizes. Sprite, one of the fastest-growing U.S. brands, makes its first-ever Big Game appearance with an ad called “Tacos” from the “Wanna Sprite” campaign, starring LeBron James.

“Love Story” is a celebration of Coca-Cola, peoples’ love affair with food, and the satisfaction and pleasure drinking an ice-cold Coca-Cola brings to a meal. This ad exemplifies the Company’s efforts to help shape choice in the U.S. by highlighting Coca-Cola brands – Coke, Coke Zero and Coke Life – and small packs like the 7.5-ounce Mini Can and the 8-ounce glass bottle. In the ad, Coca-Cola products, served with dishes such as paella, tacos, BLTs, grilled flank steak and vegetables, illustrates the universal truth that Coca-Cola makes any meal complete. The ad was created by McCann Worldgroup. The 30-second ad will air during the second quarter.

In “Tacos,” James, a Sprite brand ambassador since 2003, uses his comedic acting chops to explain why he would never tell fans to drink a cool, crisp, refreshing lemon-lime Sprite because they already know how delicious it is. No matter whether people are eating spicy tacos or sitting poolside on a hot, summer day, a Sprite endorser would simply invite them to enjoy a Sprite by asking, “Wanna Sprite?” In a series of TV spots and digital content, the “Wanna Sprite” campaign gives a refreshingly authentic take on what it means to be a Sprite endorser. The 30-second ad, directed by Neal Brennan and created by Wieden + Kennedy New York, will air during the fourth quarter.

“Advertising brands from across the Coke portfolio during the Big Game offers an enormous opportunity to underscore our commitment to choice and our variety of smaller pack sizes in the United States. This platform also allows us to re-introduce fun and successful campaigns from fast-growing brands, such as Sprite, to millions of people,” said Stuart Kronauge, senior vice president, Brand and Strategic Marketing, Coca-Cola North America. “Our Coca-Cola and Sprite ads deliver on everything the Big Game is about: delicious foods, refreshing beverages and the camaraderie of gathering with friends and family.”

During the pre-game broadcast, the Company will air “It’s Beautiful”, which first debuted in the 2014 Big Game. The premise of “It’s Beautiful” can be simply stated: America is beautiful and Coca-Cola is for everyone. The story celebrates Coca-Cola moments among all Americans and features snapshots of American families. “It’s Beautiful” is a powerful ad that promotes optimism, inclusion and celebrates humanity – values that are core to Coca-Cola. Since “It’s Beautiful” first aired in 2014, it has continued to run across television and cinema broadcast – including national holidays of patriotism in America, such as July 4th and Memorial Day, and major moments in national and international sport and entertainment, like the football playoffs, New Year’s Eve, and several Olympic Opening Ceremonies.

“This is our 11th consecutive year advertising in the Big Game. Our 2017 strategic approach is decidedly different than recent years in that we are broadcasting already-existing creative,” said Kronauge. “We are excited to use this powerful platform to showcase two campaigns that tell stories, which are loved by our fans, proven to drive results for our business, and more important, illustrate the simple pleasure drinking an ice-cold Coca-Cola or refreshing Sprite brings to a meal.”