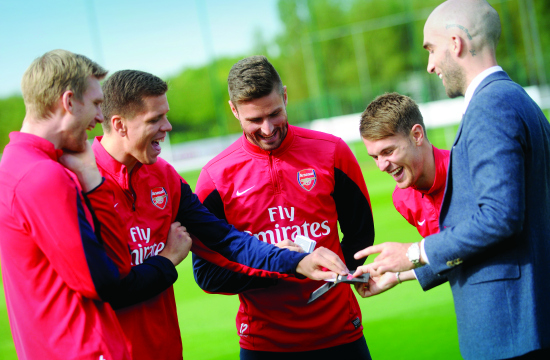 After an inter-agency pitch, CMW was selected to create a campaign to promote Citroën’s new DS3 Cabrio and their partnership with Arsenal FC.

To complement Citroën’s advertising theme ‘Escape the Ordinary’, CMW chose magic as their overarching theme, creating a show-stopping experience with up and coming magician Drummond Money-Coutts, aka DMC, performing a number of tricks with the Arsenal team.

The resulting campaign includes a short film which sees DMC, widely tipped to be the next big thing in magic, wowing Arsenal’s Aaron Ramsey, Oliver Giroud, Per Mertesacker and Wojciech Szczęsny with some mind-blowing magic.  Citroën’s DS3 Cabrio acts as the centrepiece for the film’s main event alongside an, as yet unnamed, high profile footballing legend.

The campaign launches this week with teaser videos being seeded across social networks and a competition hosted on Facebook giving away the DS3 Cabrio featured in the film as a prize. Entrants are invited to take part in an online card trick before entering their details into the prize draw.

Emma Christian, Citroën’s head of advertising and marketing communications, said: ‘We at Citroen want to leverage and celebrate our on-going partnership with Arsenal FC by adopting different approaches of engagement which CMW has achieved with this entertaining campaign. We look forward to seeing how the public respond.’

Liz Wilson, CEO, CMW added “The DS3 Cabrio’s fully retractable roof has a magical quality that was the natural startpoint for this work; Drummond Money-Coutts has created a magical reveal that delighted the Arsenal players on the day, reuniting them with a footballing legend.”