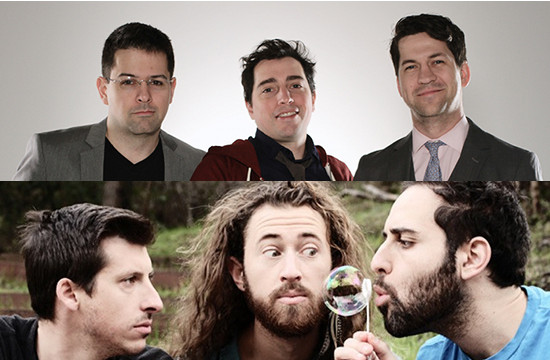 Photo - Above: Jetpacks Go!, Below: The Kloons

Mitch Lewis, Greg Washburn, and Nik Kazoura, together known as The Kloons, launch and create original content including sketch comedy, music videos and reality-based game shows for their YouTube channel, which boasts more than 11 million views and 110,000 subscribers. The Kloons have created a viral network of viewers and continue to inspire a positive shift in how people experience the world around them through film, live performance and social experimentation. Mitch Lewis also manages the YouTube channel for The Tonight Show with Jimmy Fallon, and just last week, The Kloons were accepted into SHOOT magazine’s 12th Annual New Director Showcase.

"We've been looking for the opportunity to grow our body of work and partnering with Click 3X will take us to that next level,” said The Kloons. “We're also very grateful and excited to be one of the New Directors chosen by SHOOT. It's been nearly four years of creating work on YouTube, with the last year really focused on branded content, so it's a great affirmation for the time and effort we've invested. We love creating work that tends to dive into the surreal and we're really looking forward to bringing that kind of storytelling to the masterful VFX work and production that Click 3X shares with the world.”

Jetpacks Go! is comprised of directing team, Alden Ford, Justin Tyler and Bobby Webster. Alden and Justin have been working together as writers and comedians for nearly a decade out of the Upright Citizens Brigade Theater, and have written and directed both scripted and non-scripted television for Comedy Central, MTV, MTV2, FUSE, Nickelodeon and Fox Sports 1. Bobby's background is in film, directing shorts and commercials, as well as shooting features and an Oscar-winning short film. Together, they specialize in producing gorgeous, creative, hilarious commercials and content for brands like Oral-B, Boost Mobile, Nerdist, Comedy Central, Trident, Silk Soymilk, Sprint and the UFC.

“Click 3X was promised Jetpacks Go! and now they have them!, said Jetpacks Go! “We’re thrilled to join the roster of directors at one of the best companies in the biz. We come from a comedy background and hope to bring something special, exciting and new to everybody in the Click family. Jetpacks are GO.”

“The Kloons and Jetpacks Go! create content that’s as purposeful and deliberate as it is silly and fun. They have a deep understanding of what makes a video clickable and shareable, and that is apparent in every project they touch,” said Megan Kelly, Executive Producer, Managing Director, Click 3X Live Action. “Their 360 degree approach to content creation is an invaluable skill in the modern advertising world.”

Jetpacks Go! have kicked off their work with Click 3X with a spot for Ruffles called #RoughLife which features The New York Jets wide receiver, Eric Decker.