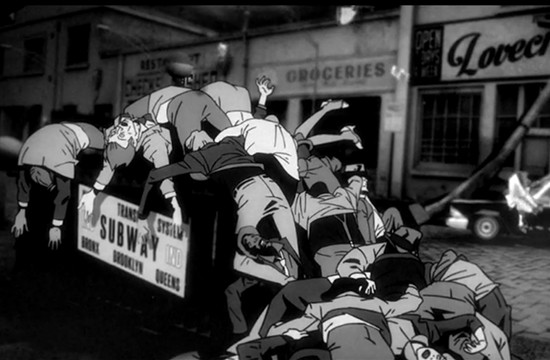 The team at Click 3X have completed their first animated film that was created by them entirely.

How would we react if a black hole suddenly opened up around us and we realised that our everyday life was coming to an end? With madness and despair, or, would we be able to find redemption in the last few moments?

During the Videophonic session at the recent PromaxBDA conference, creators had the chance to run wild by creating never-before-seen music videos for songs before the MTV era. Click 3X created the animated short film "Sleep Walk: A Feel Good Doomsday Flick" to the song "Sleep Walk" by Santo & Johnny. Set in a 1959 black and white, crumbling Manhattan, a black hole appears over the city, and during the last few moments of the apocalypse, a homeless doomsday enthusiast learns that it is never too late for redemption.