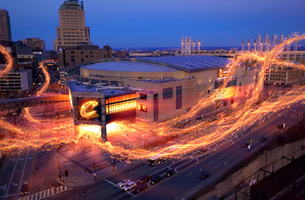 Golden Globe-nominated digital studio Reel FX (Dallas/Santa Monica) has teamed up with the Cleveland Cavaliers to take the Cavs fan experience to the next level with all new player introduction video specifically created for the Cavs 2016 NBA Playoff run. The new video debuted at Game 1 of the first round of the Cavs vs. Detroit Pistons NBA Playoff series on Sunday, April 17th.

The Cavs approached Reel FX with their vision for something impactful and memorable to kick off the team’s 2016 playoff run. Reel FX Creative Director, Colin McGreal teamed up with the Cavs QTV production team including Paul Mazzoleni, Sr. Producer of Creative Content Development and A.J. Johnson, Sr. Producer for the Cavaliers. Together they honed a multi-platform concept that would engage fans from the court to the rafters of The Q, creating even more energy for the team and a synergy between the team and its fans.

“The Reel FX team helped bring our ideas to life with their animation technology that successfully gave the project a mega dose of high voltage emotion that we were looking to create for the all-important player introduction video,” said Cavaliers CMO Tracy Marek.

Adds McGreal, “Working with the Cleveland Cavaliers organization was a amazing collaboration. Not only were they very enthusiastic creatively but also savvy to the needs of a process that needed to launch at play-offs. They are a very forward-thinking group that continues to look for ways to push the arena experience to be immersive and special. I look forward to entertaining new ideas with them in this evolving industry."

Fans first experience the content as 3D imagery transforms the court in a :20 second piece with explosive visual effects that create the illusion of a city pulsing with energy beneath the court. Fans’ eyes are then drawn to the Cavs’ Humongotron, the arena’s massive HD scoreboard, as the playoff player intro zips through sweeping views of Cleveland landmarks and fans look upward to find swarms of light trails of Cavaliers spirit filling the sky and guiding them into Quicken Loans Arena – all while taking in some of the season’s most unforgettable moments. The piece culminates with the playoff “ALL IN 216” theme and logo.

Reel FX’s Kevin Althans directed the three day shoot which took place in Cleveland in mid-March. Althans, McGreal and Executive Producer Steve Johnson worked with the Cavs organization to identify key locations including Quicken Loans Arena and filled them with local residents and Cavs fans. Reel FX Senior Editor Quan Tran cut the piece. The visual effects and motion design for the Player Intro Piece and Court Projection were done in After Effects and Cinema 4D and rendered in Arnold. In addition to the shoot footage, and game highlights, hi-res stills were used along with camera projection techniques to create unique 3D moments in the action.