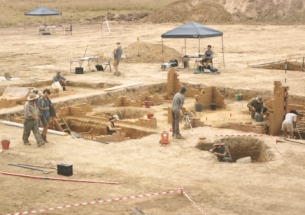 MLC and Clemenger BBDO Melbourne are launching series two of the highly successful Save Retirement platform with ‘The Dig’.

Set in the future, the campaign centres on an archaeological dig. Artefacts from the ‘Retirement Era’ are being uncovered, including a small fishing runabout, a banana lounge and sporting equipment. The head archaeologist is explaining to a colleague that this is “One of the most important digs of this century”.

The campaign builds off the Save Retirement platform MLC launched in 2014, aiming to help reduce the $1 trillion gap that exists in Australians’ retirement savings.

General Manager, NAB Wealth Marketing, Rob Harris, says that while the Save Retirement platform is starting to change the way Australians look at their retirement savings, a whitepaper commissioned by MLC recently, shows even middle class Australians are feeling the pinch.

“While some Australians are thinking about their retirement, many haven’t put those plans into action. Even those on $200,000 a year say they are living pay cheque to pay cheque. With half of the population now likely to outlive their retirement savings by up to 13 years, we still have a lot of work to do to ensure every Australian can continue enjoy life in retirement.”

“Building on the Save Retirement platform, and continuing the light-hearted tone, we wanted to portray what could happen if we continue to ignore the statistics that tell us we aren't saving enough money to enjoy retirement,” he said.

The integrated campaign launched on Sunday through TV, digital, OOH, print and a refreshed website.