Awards and Events 128 Add to collection

Ali and Carlo Mazzarella awarded for their beyondblue radio campaign 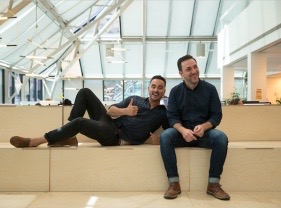 The 'Sound Booth' spot, for client beyondblue, also won the Silver Siren for best single radio ad. The campaign aimed to raise awareness about anxiety and encouraging those with symptoms to seek help.

The Siren Awards are judged by the Siren Council, comprised of creative directors and producers from leading advertising and creative agencies and studios across Australia.

The spot completed a trifecta by also winning the Client Award, a $5,000 cash prize which is judged by a separate panel of clients, rather than agency creative directors.

Ali and Mazzarella (pictured above) said the most effective radio ads are those that are not too complicated: "Working on the anxiety campaign, we learned how crippling a condition it can be, often stopping people from finishing things they want to achieve. We thought that this could be a pretty powerful concept to explore."

Matt Perrott from Uncanny Valley won the Silver Siren in the craft category for production of the 'NSW Water Safety' spot for the NSW Government.

The 14th annual Siren Awards, run by Commercial Radio Australia, are designed to encourage excellence and creativity in radio advertising.