Clemenger BBDO, Melbourne's 'Give Registry' Wins Two Gold + Best of Discipline in PR at One Show 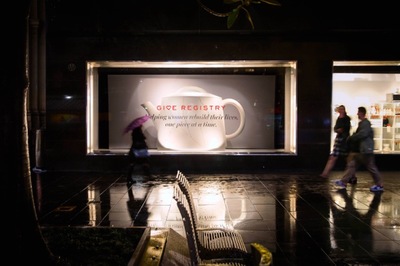 Clemenger BBDO Melbourne and CHE Proximity had impressive performances at the first night of The One Club for Creativity's 45th annual One Show, the most prestigious global competition celebrating creativity of ideas and quality of execution.

Clemenger BBDO was awarded Best of Discipline and a Gold Pencil in Public Relations for "Give Registry" on behalf of Myer.

Says Kevin Swanepoel, CEO, The One Club for Creativity: "These Best of Discipline winners are a true reflection of the global breadth of today's amazing creative work, and of the global scope of The One Show itself. From Amsterdam to Auckland, Madrid to Melbourne, agencies and brands around the world are taking creative excellence to a new level.  The One Show is proud to be the awards program to identify, elevate and celebrate that great work on a global scale."

McCann New York's "Fearless Girl" for State Street Global Advisors and BBDO New York's "The Talk" for P&G each won a Gold in the Cultural Driver Award, recognizing influential ideas and executions that had a major impact in their respective cultures and environments, and exist outside the traditional categories in advertising and design.

The One Show Green Pencil, recognizing the single most environmentally conscious creative work for the year, was awarded to AMV BBDO and LADbible, both London for "Trash Isles" on behalf of LADbible and Plastic Ocean.

The first night of The One Show was hosted by comedian Chris Gethard, host of "The Chris Gethard Show", the "Beautiful/Anonymous" podcast, star of "Career Suicide" and, according to his website, "a guy you've seen on television and in movies from time to time but can't quite place".

This year's winners are announced on two nights of The One Show during The One Club's Creative Week, May 7-11, 2018 in New York.

The preeminent festival showcasing the intersection of advertising, innovation and creative thinking, Creative Week also includes the ADC 97th Annual Awards, the dynamic Young Ones Education Festival, inspiring sessions with some of the biggest names in the industry at the Creative Summit, and the exclusive Executive Creative Summit, open to a limited number of top-level leaders (founders, CCOs and managing partners).

The One Club for Creativity, producer of the prestigious One Show, ADC Annual Awards, Creative Week and Portfolio Night, is the world's foremost non-profit organization recognizing creative excellence in advertising and design.  The ADC Annual Awards honors the best work across all disciplines, including Advertising, Interactive, Design and Motion. Creative Week takes place in New York City every May and is the preeminent festival celebrating the intersection of advertising and the arts.