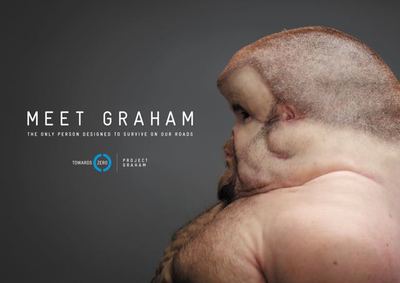 Australia has scored 4 Gold Pencils, 7 Silver Pencils and 11 Bronze Bronze Pencils out of a total of 323 Pencils - 92 Gold, 102 Silver and 129 Bronze - to winners from 30 countries. Overall, there were 21,844 entries from 73 countries. Seven Best of Discipline winners were announced, as well as special award winners: Cultural Driver Award and the Green Pencil.

Clemenger BBDO Melbourne's creative chairman, James McGrath, was pleased with what the result meant not only for the agency, but importantly for the bravery of its clients.

Says McGrath: "The One Club talks about being the 'keeper of the flame' for Advertising creatives and also about inspiring clients to seek the rewards that come with calculated risks and new ideas, for our project 'Meet Graham' and for our clients, nothing is more confirming."

Says Nick Garrett, CEO, Clemenger BBDO Melbourne: "As an agency we couldn't be more pleased with the win, and in particular being presented with a Best of Discipline award. We're in spectacular company with the other winners on the night and it's a huge honour to be for ourselves and our clients to be recognised for constantly pushing the envelope in our work."

The complete list of Wednesday's winners can be found here.

The Cultural Driver Award, which celebrates influential ideas and executions that have had a noticeable impact on pop culture, awarded three Pencils:

Says Kevin Swanepoel, CEO of The One Club for Creativity: "What better way to kick of the Cultural Driver Award than with one of the most influential entertainers of this generation? Provocative and powerful, "Formation" - the linchpin of Beyoncé's genre-bending Lemonade album - is more than a song or a music video. It's a manifesto."

The Green Pencil, which recognizes environmentally conscious creative work, was awarded to "Edible Six Pack Rings" for Saltwater Brewery by We Believers/New York. This entry also won a Gold Pencil in CSR.

The following were the Best in Discipline winners from Wednesday night:

Public Relations: "Zero Minutes of Fame" for The Brady Foundation by Ogilvy & Mather/Chicago.

Complete rankings will go live on Friday, May 12 at www.oneclub.org/awards/theoneshow.
view more - Awards and Events