Awards and Events 113 Add to collection

Named APAC Agency of the Year. 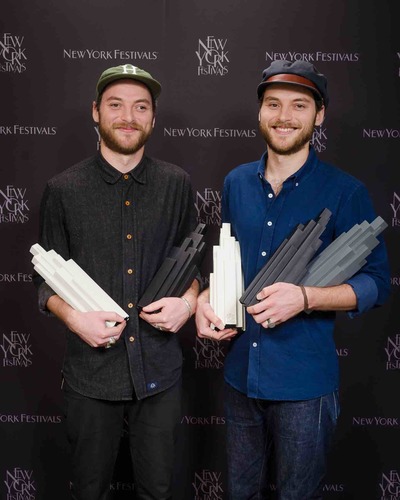 The prestigious 2017 Best of Show Award was awarded to "Meet Graham" Clemenger BBDO Melbourne's Public Service Announcement for client Transport Accident Commission Victoria. Graham is part interactive sculpture, part educational tool, and a catalyst for a global conversation; he illustrates how our bodies would need to change to survive a car crash. Using decades of road safety data and medical research a trauma surgeon, a road safety engineer and a renowned artist the human body was re-designed for survival against a low impact crash.

Says James McGrath, chief creative officer with Clemenger BBDO Melbourne on earning the Best of Show Award: "It is a great privilege and humbling for us to join the lineage and legacy of New York Festivals. We are thrilled to be awarded Best of Show, we want to thank our creators and makers of course but most of all our clients, whose bravery and genuine belief in solving real world problems inspires us."

Finch Company Sydney's "Date" for Foxtel was honored with 2  First Prize Awards; "Consequences" Transport Accident Commission took home both a Second and Third Prize Award; and "Stop It At The Start" for Department of Social Services earned the Second Prize Trophy. "Every Second Counts" St. Kilda Film Festivals was recognized with both a Third Prize and a Finalist Award.

Havas was recognized with a "Air Force - What is up?" for Australian Defence Force; and Havas/ Red Agency/ Finch received kudos for "Steve Waugh - The Riderless Bike"  for  Steve Waugh Foundation.

Leo Burnett Melbourne was in the winner's circle earning 6 Second Prize Awards, 8 Third Prize Awards  and 2 Finalist Certificate for "Reword" for Headspace. "Preserved Memories" SPC Ardmona earned the agency an additional 2 Third Prize Awards and 5 Finalists and "Chase it" for Honda Civic was recognized with a Finalist Award.

The annual event celebrating the World's Best Advertising was hosted by actress and TV personality, Debi Mazar (left) and kicked off with a cocktail reception followed by the awards ceremony and an after-party at the Ascent Lounge to honor trophy-winners. The spotlight was on the 2017 award-winners as they celebrated with advertising creatives, Jury members, press and guests from around the globe.

The 2017 executive jury of global chief creative officers, and executive creative directors, and NYF's first-annual Film Craft executive jury, comprised of some of the most creative, technically advanced filmmakers in the industry today, selected the World's Best Advertising award winners from the Shortlist chosen by the NYF's 300+  Grand Jury members from 40 countries.

Lockheed Martin, American global aerospace, defense, security and advanced technologies company was honored with the New York Festivals 2017 Brand of the Year Award for their commitment to creativity and innovation. Creative work submitted on behalf of Lockheed Martin was honored with two Grand Awards, as well as 6 First Prize Awards.

Says Nettie Johnson, vice president external communications, Lockheed Martin Corporation: "Field Trip to Mars" was an incredible opportunity for us to reintroduce Lockheed Martin's brand philosophy of innovation in order to push boundaries, go further and be pioneering in everything we do. We are grateful to our partners at McCann and honored to be recognized with such a prestigious acknowledgement of our efforts."

Says David Lubars, chief creative officer, BBDO Worldwide: "It's important to us that so many BBDOs in the network are represented, because it proves that our claim of being a 'global boutique' is true; there are a lot of great BBDOs around the world."

The Regional Agency of the Year Award is awarded to an advertising agency that earns the highest score for entries in all competitions across all mediums. This year's Regional Agency of the Year Awards honors the following global agencies: Europe - Heimat Berlin; North America - McCann New York; South American - AlmapBBDO, Sao Paulo; and Asia Pacific - Clemenger BBDO Melbourne.

The 2017 Executive Jury awarded the following prominent agencies with Grand Prize Awards for their exceptional entries:

Outdoor or Out of Home Marketing: McCann New York, USA "The Field Trip to Mars" for Lockheed Martin.

New York Festivals is recognized worldwide as a touchstone for global creative excellence in advertising and marketing communications.