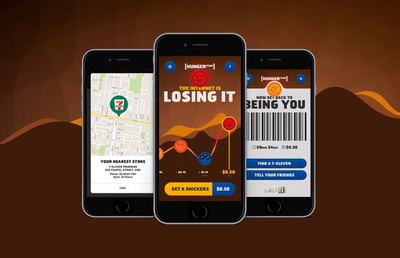 The inaugural Twitter Awards are being announced today and Clemenger BBDO Melbourne has won two of a total of only 12 medals awarded globally.

The agency's campaign for Snickers Hungerithm, which monitored the mood on Twitter and adjusted the price of a Snickers bar accordingly (delivering more than 30 million earned media impressions during the five-week campaign), has been awarded the Gold medal in the #Impact category.

The Play Melbourne Live campaign for Visit Victoria (formerly Tourism Victoria) has been awarded a Silver medal in the #Live category. The agency created a small ball with a phone tucked inside as a fun way to get regular people to share their favorite hidden Melbourne hot spots. Viewers could ask questions and interact in real time as well. Tourism Victoria was the first tourism office in the world to use Periscope to bring a destination to life in such an immediate and intimate way.

The founder of Periscope, Kavon Beykpour, credits Play Melbourne Live as being an inspiration to him in the user experience he was trying to create when he was developing Periscope.

Says Nathan Burman, Twitter Australia: "There were over 529 entries globally, with 12 from Australia and Clemenger BBDO Melbourne's campaigns are the only winners out of Australia so this is amazing. You've done so well.

"Saying that we're happy to announce the winners of the first #TwitterAwards is a huge understatement. These awards recognise the marketers, the idea people, the innovators and the creators all over the world who work tirelessly to create ingenious campaigns. The winners taking home trophies are simply the best of the best."

Says James: "We are so lucky to have clients willing to truly engage with new channels and really push boundaries. Both these campaigns were firsts in their field and it is thanks to the foresight and trust Snickers and Visit Victoria put in us that we are being recognised on the global stage in this way."
view more - Creative