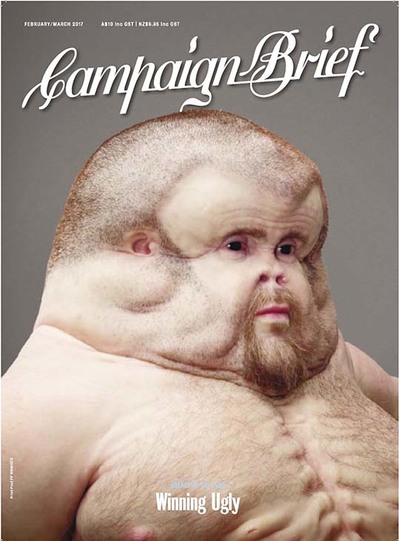 For a record ninth time Clemenger BBDO Melbourne is Campaign Brief's Agency of the Year.

Clemenger BBDO Melbourne creative chiefs James McGrath and Ant Keogh believe people have better things to do with their time than worry about advertising. They are late for work, they have to dig a hole in their backyard, they have to take their daughter to a Nordic-themed birthday party... so who has the time for anything really?

Therefore, when it comes time to talk to them, Clemenger BBDO Melbourne aims to make it count.

"We all know the disproportionate number of messages we encounter in our daily lives," says Clemenger BBDO Melbourne creative chairman James McGrath. "So being distinctive, recognisable and captivating creatively as always, is vital but the shift to meaningfulness, to being useful, to being confirming of an ideal, reinforcing being a brand worth belonging to, that's what 'make it count' is all about. We also talk about 'make no pollution', hard to do, particularly when any message should be timely and relevant because of its context."

According to Clemenger BBDO Melbourne executive creative director Ant Keogh, advertising is a bit like if you stopped at a train station, you're hanging out the window and you see the love of your life - you've got a few seconds to say something before the train leaves again. "You have a few words and whatever you say better count," says Keogh. "We have these limited moments to make a disproportionate impression."

This observation paid off, not only with industry recognition but in real life: there's a guy with a Carlton Dry tattoo, memes of TAC's 'Graham' spread and mutated around the world, people tweeted angry and hilarious tweets for Snickers 'Hungerithm' and the Bonds 'Boys' campaign continued to elicit startled reactions from newsreaders seeing large talking testicles for the first time.

The ballsy campaign also picked up a truckload of awards from all over the globe, including five Cannes Lions, four Golds at the Clio Awards, First Prize at New York Festivals in Film and Digital, along with countless awards at Spikes, Caples and IAB Mixx.

Yet when it comes to personal standouts, Clemenger BBDO Melbourne chief executive officer Nick Garrett points to NAB and the 'More Than Money' brand relaunch.

"It's a huge platform with immense potential and one of those rare comments where communication can drive cultural change on a huge scale for an organisation," he says. "But in terms of a pure idea, for me it has to be 'Graham' for TAC because it is one of those special moments that none of us expected, but we all secretly hope for, and its global amplification has been remarkable."

Snicker's 'Hungerithim' is also high on his list because of the complexity of making it happen and bringing the idea, technology and supply chain together seamlessly.

Whilst the agency attracted five star ratings at the award rounds, selected as Agency of the Year at CLIO and Network of the Year at AWARD Award, last year was also Clemenger BBDO's biggest financial year in its 70-year history. Revenue grew by 11 per cent and profit margins were up by 13pc. New business was strong on the agenda with the agency winning pitches for Airbnb, Myer Digital, Mattel, AHM, La Trobe University, The Australian Federal Government and the Victoria State Government, along with BCF, 2XU, Ovarian Cancer Australia and more work for Australia Post.

Another major focus for the year was addressing the future of the agency's structure, with Clems Melbourne moving from a creative department to a creative agency by sharing accountability across departments with senior business and leadership teams for each of its clients' businesses based on a triangular model. Each team now has a representative from account management, planning and creative and all decisions have to be made collectively - with each team responsible for the work, the relationship and the money.

The rest you can read in the latest issue of Campaign Brief, which includes the annual CB Agency Hot+Cold Charts, out next week.

You can view this issue online and subscribe at Campaign Brief Online or request a subscription form from Mina via email.
view more - Awards and Events