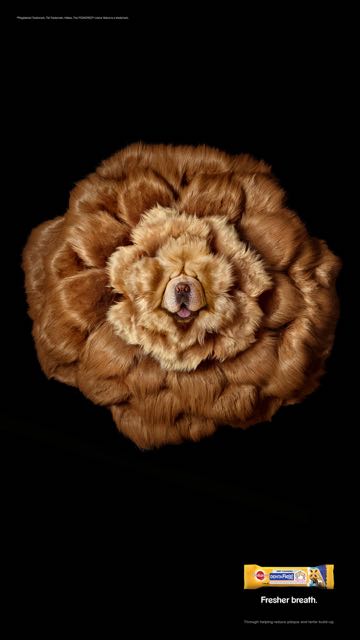 Clemenger BBDO Melbourne has created a new campaign for Pedigree DentaFlex, further building on its 'Feed the Good' platform.

A dog's' breath isn't always the best. But sometimes that whiff isn't entirely their fault. Mars Petcare marketing director, Ben Culligan, says it's often exacerbated by the things around the house that dogs love to chew on or pick-up.

Says Culligan: "DentaFlex is a tasty treat for dogs which provides a deep clean for their teeth while they chew. It's revolutionary texture gets around the teeth, getting in close to the gum line to help fight the build-up of plaque and tartar."

Says Keogh: "Its strength lets us deliver great product work, as well as big global brand campaigns, which is such a pleasure."

The campaign includes outdoor and a series of radio spots, which graphically describe the delightful things dogs put in their mouths during the day - usually just before giving their owners a 'kiss'. The stunning 'flowers' (Old English Sheeprose, Chow Chow Blossom and White Samoyed Gerbera) were created by a model maker, covered in fake fur and photographed.