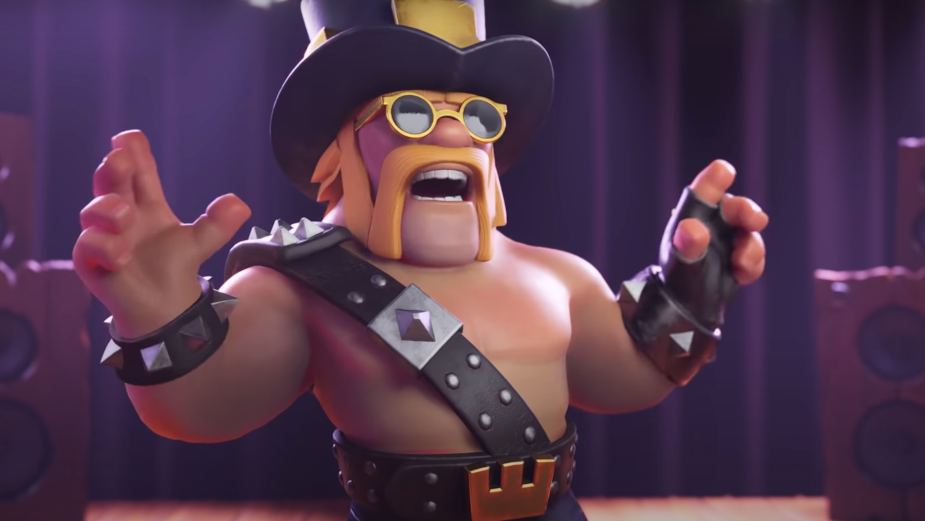 Supercell Came to Waste to create a show stopping piece of content to celebrate the eighth birthday of Clash of Clans, using content creators and some cutting-edge motion capture technology developed by production partner Psyop.

Supercell,Waste and Psyop have created a unique social film featuring the Party King (aversion of Clash of Clans character the Barbarian King), brought to life in CGI with state-of-the-art motion capture technology, hosting his own Clash of Clans-themed quiz.

The Game show, which takes a look back at eight years of Clashy mayhem and fanmoments, pits gaming content creators Galadon and Lady B against Supercell game creators Darian Vorlick and Eino Joas. Inspired by 90s rock concerts, the film sees the Party King grill the two sets of contestants with some tricky (andfunny) questions, to find out who knows more about Clash of Clans. The Larger-than-life host sings, plays guitar and bursts into song, awarding points to the two teams as they battle for the chance to be crowned KING OF CLASH.

The Entire film was created during lockdown, shot in real-time via Zoom across four global locations: London, Helsinki, New York and Los Angeles.

The Quiz show film, which can be found on YouTube, is supported by content on Clash Of Clans social channels and those of the two featured content creators.

Andrew Bentham, associate creative director, Waste, said: “Working with Supercell and our production partner, Psyop, who brought the mocap to life, it was a herculean effort over four time zones, with everything taking place overZoom. The end result is a first for the tech- and a great piece of content for the community.”

Alistair Campbell, executive creative director, Waste, said: “Live motion capture isone of the most exciting technologies around right now, from a creative point of view, and it’s perfect for bringing Supercell’s great characters to life.We’ve only just scratched the surface of what’s possible, but already the results are amazing.”

Michael Gurman, brand marketing lead,Supercell, added: “We wanted to create something unique to celebrate this milestone for Clash of Clans. Waste Creative solution, which harnesses Psyop’s amazing technology and taps into the audiences of some of our favourite content creators, is a great way to mark this special birthday. We hope fans will enjoy reliving the last eight years with us.”