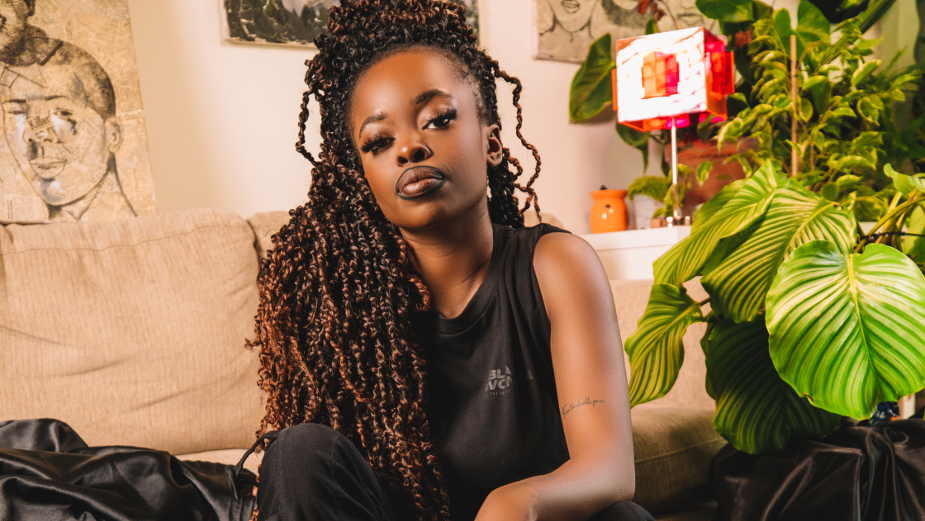 Clarks Originals, the British shoe brand, has collaborated with Black owned non-gendered apparel and accessories brand, FANGIRL, to launch a new platform #InHerShoes to mark Women’s History Month and centre diverse stories. The content series, rolling out across Clarks Originals’ social channels from today, spotlights Black British female creatives who walk viewers through their journeys and give insight to what it’s like to be a Black woman in today’s society. while styled in a bespoke, limited edition run of Clarks Originals x FANGIRL Wallabees and T-shirts.
Creatively directed and directed by Rani Patel Williams, creative entrepreneur and founder of FANGIRL, the series features the stories of five Black British women pushing culture forward:
Mata Marielle, (Addressing The Colour Balance #InHerShoes) one of the few leading Black celebrity make-up artists who is also the founder of her own make-up line, Mata Labs, created to cater to dark skin tones.
Priya Ahluwalia, (Designing A More Inclusive Industry #InHerShoes) the multi-award winning fashion designer behind her namesake label Ahluwalia, and recipient of the Queen Elizabeth II award for her work to drive a more inclusive and sustainable industry.
Raheaven,  (Finding Home In Music #InHerShoes) a singer songwriter, music has been a vehicle of self-discovery inspired by her parents and Eritrean heritage.
Jordss, (Defying Expectations #InHerShoes) DJ and founder of Girls Can’t DJ, a platform showcasing the female DJ talent across the globe. Jordss has defied expectations within the DJ scene as well as surviving a cardiac arrest at the start of 2020.
Trina Nicole, (Changing The Shape of The Catwalk #InHerShoes) a dancer, model and founder of The Curve Catwalk who has created a space  for herself and others to be seen and represented within the dance and modelling industries.
The collection of short films and stills offers a window into what it means to be a Black British woman in the creative sector, with each of the five women opening up about how their history influences their creative work. Against a backdrop of dreamlike visuals, the women invite viewers to walk in their shoes for a moment, donning personalised FANGIRL Wallabees as they take us on a journey through their history, homes, workspaces and local communities.
Clarks Originals’ has a rich and storied relationship with the Black diaspora, a dialogue between brand, culture and creativity which stretches back to the 1980s and has featured the voices of Black icons such as American rapper Slick Rick, rap collective Wu-Tang, British MC, UK drill artist M1llionz, UK dancehall artist  Alicai Harley, and British rappers D Double E and  Ghetts and Jamaican dancehall artist Vybz Kartel.
Coinciding with Women’s History Month in March, the ‘In Her Shoes’ campaign firmly centres the Black female gaze for the first time in their history, creating space for Black British women both in front of and behind the camera, with FANGIRL founder Rani responsible for both the creative vision behind the project and the direction of the films themselves.
Throughout the films we also see a black pathway which visually frames the women, and conceptually acts as the thread between their histories - the paths of all Black women who have come before them - and the future legacies of those who will follow in their footsteps. As a motif, this visible Blackness is a direct and conscious challenge to a society which renders Black female culture creators largely invisible.
In addition to the limited-edition Clarks Originals x FANGIRL Wallabees, the women featured in the films each wear a Clarks Originals x FANGIRL t-shirt featuring a statement on their backs which is a truth about being a Black woman today – “Black Women Are The Source and The Sauce” , “Why Are Black Women Told They Are Too Loud But Never Heard”, “Why Are Black Looks Accepted on Everyone But Black Bodies”, “There Is No Progress Without Black Women” and “My Melanin Is My Biggest Flex”
Tara McRae, CMO at Clarks Shoes & Clarks Originals said: “It has been a joy to be able to provide our platform Clarks Originals in order to shed some much needed light on the vital women who are shaping the creative industry in the UK. Partnering with FANGIRL aligns both our brands together under the same banner of encouraging self-expression of individuals without limits, especially from marginalized communities. Of course there are so many women who remain behind the scenes but by championing these five women in their own individual fields will hopefully inspire more women to become the disrupters of industry and to act as a reminder that there is so much more work to be done to unite women of minority backgrounds. It is so important to keep pushing the culture forward by amplifying the women who are pioneering that conversation, and Clarks Originals aims to do that more than ever not just this year within the UK but also in another key territory for us – the U.S, so watch this space…”
Rani Patel Williams, founder and creative director at FANGIRL, added: “I created FANGIRL at a time when I felt most invisible and the brand has always been about creating space for those who feel most marginalised. Sitting at the intersections of race and gender, those self-identifying Black women are one of the most marginalised and invisible groups in society, with their contributions often left undocumented and out of the history books. These issues have been brought more sharply into focus by the  Black Lives Matters movement and the recent conversations about gender-based violence.”
“It has been a pleasure to work with a brand like Clarks Originals’ which is proud to celebrate and acknowledge how its heritage has been formed in dialogue with Black culture. In this campaign, we honour and document the contributions of five Black women pushing culture forward and, in doing so, celebrate the contributions of those who have gone before them and been forgotten.”
view more - Creative