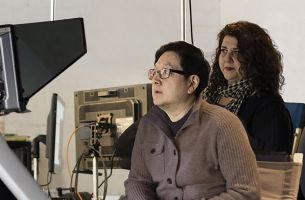 The signing marks the first independent sales agreement for CinemaStreet, which has increased its visibility and awareness in the agency marketplace thanks to the work it’s produced over the past three years for iRobot, all of which was directed by Han.

Most recently, Han and CinemaStreet helped launch the newest addition to the Roomba line, the Roomba 980. As a former ad agency creative director, Han served as Creative Director on the work and also provided strategic direction.

Han says the agreement between CinemaStreet and Dubay will help him and Offenbach as they offer their unique approach to production to a wider agency audience. “We’re definitely not the traditional production company model,” he notes. “This association allows us to use traditional channels to show both agencies and brands how Ed Han Consulting and CinemaStreet work together.

“Dana and I believe in delivering a final product that is bigger than the budget, so we’ve been patient about developing our network in order to bring best-in-class capabilities to each project,” Han continues. “We both felt that signing with Dana Dubay was the next logical step in getting our name out there. We weren’t going to talk to agencies until we were confident that our process was tested and proven.”

Adds Offenbach, “We also feel agencies will respond positively to having a different option in terms of resources and experience to draw on. In Ed’s case, an agency creative who’s moved into directing isn’t new. But his experience as a brand consultant and knowledge of how to build a story around a brand can be useful in ways big and small.”

Offenbach first met Dubay when she was an agency producer and he was handling sales on the post production side of the business, and was impressed with how he presented his clients and their capabilities. (Prior to founding his independent repping agency, Dubay was Head of Sales for such companies as BlueRock, Spontaneous, Compulsive Pictures and others.) For his part, Dubay says that in the CinemaStreet / Ed Han partnership he sees the future of producing ad content for agencies and brands.

“I’ve been specializing in representing companies that are able to handle projects from concept through completion,” Dubay notes. “That ability to deliver from soup to nuts is a growing trend, and that’s why CinemaStreet perfectly fits the model of how I’ve built my agency. Dana Offenbach can produce anything, and Ed Han can do everything from strategy to storyboards. They’ve got a wealth of experience and great pedigrees between the two of them, and they represent where the business is headed: it’s moving towards people who can perform multiple roles and do each of them well, and towards people who know how to creatively stretch budgets.”

Dubay adds that he was eager to meet with Han after hearing Offenbach describe him. “I’ve known Dana for many years, and I know the kinds of directors she’s worked with, so to hear her speak so highly of Ed was really intriguing,” he says. “And then when I met him, I was as impressed with his skills and vision as a director as I was with his deep knowledge of the business.”

Han’s work with CinemaStreet reveals his holistic expertise in both strategic and creative thinking, backed by Offenbach’s talents as a producer. Their first spot for iRobot, which broke in early 2015, was named one of the five-most effective ads of Q2 that year by Ace Metrix, the industry-leading research firm.

Prior to launching Ed Han Consulting, Han was ECD at the boutique agency Walton Isaacson, where he oversaw the creative output of its offices in New York, Chicago and Los Angeles. Before that he spent a decade at Publicis in Chicago and New York, rising to the position of Sr. VP/Creative Director.

Offenbach, who first worked with Han at Walton Isaacson, brings an extensive agency background to the equation as a broadcast business manager at Y&R and Head Of Business Affairs at UniWorld before she began producing and eventually launching CinemaStreet. Her experience in both advertising and entertainment – she’s served as producer and executive producer on a number of independent feature films, and most recently produced two segments for the ABFF Honors Awards, which aired on BET earlier this month – allows her to bring not just creative insights to each project, but production efficiencies as well.