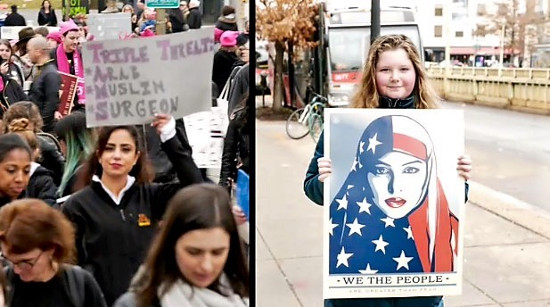 On February 21st -- the one month anniversary of the date when millions of Americans took to the streets to voice their concern about policies of discrimination and division -- an inspirational public service announcement marking the Women’s March on Washington is going live on the organisation's YouTube channel.

Produced on a pro bono basis by CinemaStreet Pictures, a woman-owned New York City production company, and directed by company owner Dana Offenbach, the video uses a dynamic, split-screen visual style to tell a densely-layered story of commitment, passion and concern for the rights of women and those being marginalised or disenfranchised in American society today.

Titled “Why I March,” the video was edited at BlueRock Editorial and finished at Scarlett, both of which are part of The Lively Group of post production companies, which is also woman-owned. The editor on the project was Noelle Webb, and the Executive Producer at Scarlett overseeing the project was Wendy Brovetto.

Shot in a documentary style, the PSA includes a range of testimonials from women and men who talk about why they’re marching, with reasons ranging from “for my daughter, my granddaughter, my mother and every woman in America” to “for this country and democracy.” It was shot by Ed Han, a former agency creative director now directing advertising and original content through CinemaStreet.

In addition to conducting interviews at the Women's National Democratic Club in Washington, where Offenbach and Han spoke with people from all walks of life who told why they were taking part in the march, the video includes scenes shot during the march itself, including scenes of such speakers as Gloria Steinem, US Senator Kamala Harris and actors and activists Jeffrey Wright, Debi Mazar, Ashley Judd and America Ferrara.

The Women’s March in Washington was one of over 400 marches that took place around the US and a total of 616 coordinated marches worldwide. According to some estimates, this was the first mass protest in history that took place simultaneously on all seven continents and in 77 countries worldwide.

The project came about when Offenbach, reeling like so many others from the election on November 8, decided to take action. A veteran filmmaker and producer, her research into groups organising to support a more progressive worldview than that espoused by the new President-elect led her to Bob Bland, the CEO and Founder of Manufacture New York (MNY), a social enterprise that is rethinking the fashion industry and creating a new business model that will transform apparel and textile production. Bland is a noted international speaker and advocate for domestic manufacturing, ethical supply chains and design entrepreneurship education.

Offenbach reached out with an offer of providing production services to help document the organising process, and worked with the grass roots group formed in New York to spearhead the march for two months prior to the event itself.

“This is a project that’s meant so much to me since I first looked to see how I could contribute to the effort and document history,” says Offenbach. “As a storyteller, I knew there would be the need to capture the excitement of the march itself and convey the mixture of outrage and optimism that came out of the experience. I also wanted to create a piece of content that enabled the viewer to feel and hear what it was like to be there. I think we’ve succeeded at that with this video, thanks to Noelle’s edit.”

Adds Scarlett’s Brovetto, “As soon as Dana told us about ‘Why I March,’ we were one hundred percent behind the project. Making our studios and our talent available to her is one small way we can help spread the passion and conviction of this noteworthy cause. We’re delighted to have partnered with CinemaStreet on this.

Offenbach notes that CinemaStreet is working on follow-up content to “Why We March” that will focus on Bland’s involvement, telling the story of the Women’s March through her singular experiences as both an entrepreneur and community organiser as well as a young mother.