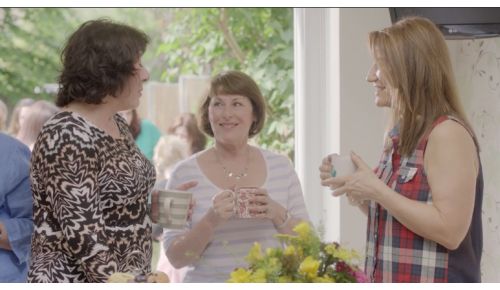 London based creative video production company Cinema Campesinos has produced and directed a moving one minute DRTV commercial for the 2014 UK launch of the World’s Biggest Coffee Morning for charity Macmillan Cancer Support. With the creative by Burnett Works, the TVC was developed to raise vital funds for the charity, who provide medical, emotional, practical and financial support to people living with cancer in the UK. The advert is scheduled for release across multiple terrestrial and digital channels on June 2, 2014.

The World's Biggest Coffee Morning, taking place on September 26, 2014 is Macmillan Cancer Support's biggest fundraising event. Last year’s event raised £20 million and achieved a 154,000 participant sign-up. This year with the help of Cinema Campesinos, the charity hopes to build upon the success of last year, raising even more to help change the lives of people affected by cancer.

The TVC centres on a coffee morning hosted by real life cancer survivor Julia Fenton, who has twice received help from Macmillan as she fought cancer in her early twenties. Julia says it all: “If it wasn’t for Macmillan, I wouldn’t be here.”   Joined by friends and family to raise cash over coffee and cake for the charity so dear to her heart, the advert illustrates Macmillan’s pivotal role in Julia’s life and the social importance of friends and conversation as they join together for the fundraising event.

It was produced and directed by Cinema Campesinos founders Robbie Knox and Ed Pettit, and edited in house.

Macmillan hired Cinema Campesinos following a competitive pitch to develop and extend the reach of its flagship fundraiser. Cinema Campesinos joint managing director, Ed Pettit says: “Macmillan have helped a number of our friends and family over the years and are a charity very close to our hearts. We were delighted to work on such an important and valuable project, and hope it helps to raise more money for such a brilliant cause.”

“We’re thrilled to be working with Cinema Campesinos on our 2014 DRTV advert for the World’s Biggest Coffee Morning. This is a key part of this year’s coffee morning campaign and as we hope to engage with new audiences and build on our past success.  Cinema Campesinos’ enthusiasm, expertise and focus has impressed the Macmillan team from the start and we’re really excited to see how the new creative performs.” Said Katherine Blaize-Smith, National Events Marketing Manager, Macmillan.