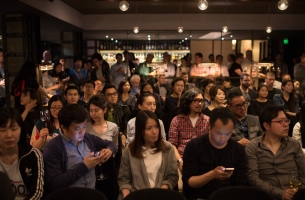 CICLOPE Shanghai last evening was a huge success, gathering over 150 of the most influential players in the local market, including agency creatives, executive producers, and directors.

Jacqueline Zhang, Executive Producer at Gwantsi, gave a very enthusiastic opening speech sharing her experience as a judge of CICLOPE Festival in 2014, and explaining the importance of a having a festival like this in China.

In the words of Jan Willem van Walsum, part of the core team developing MediaMonks in Asia, “Given the amazing growth of China as well as the exciting development of the digital space in this market it really was quite a no-brainer to come to Shanghai.”

The conference started with Eric Cruz, Executive Creative Director of AKQA Shanghai, who shared the process behind the making of Nike Rise, which probably was one of the most challenging brand installations recently done in China.

Then Fin Design´s VFX supervisor Suart White shared the latest works developed by the company in the local market, including a cutting edge VR project on which they are currently working.

Last but not least the evening ended with drinks and good music, becoming the very first edition of what will probably become a must do event for the local ad community.