Created by WCRS and directed by Joseph Mann, the ad features Churchie comforting a talking car who has been defaced with graffiti 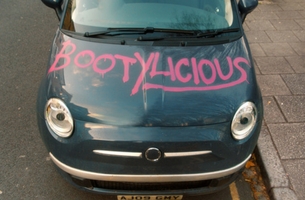 Today Churchill launches its new TV advert ‘Shameful Tattoo’, promoting its new Motor Insurance offer – Churchill’s Vandalism Cover, where its customers no claim discount is protected if they claim after their car is vandalised.
Created by WCRS and directed by Joseph Mann at Blinkink, the ad is the latest in Churchill’s ‘Objects’ series and features Churchie comforting a talking car (voiced by Josh Widdicombe) who has been marked with suggestive ‘Bootylicious’ graffiti whilst asleep.
Designed to appeal to a broad TV audience, the ad is a cheeky and playful take on one of the most frequently occurring and expensive to repair instances of vandalism, and features the track ‘Shake Your Booty’ by KC & The Sunshine Band.
The 30” TV spot is first due to air Monday morning on ITV4 and will run throughout the day in shows such as Emmerdale and Coronation Street on ITV. A 20" of the ad will run from March.
Lucy Brooksbank, Head of Marketing at Churchill, comments: “This new ad drives home that people can continue to ‘Depend on the Dog’, with a brand new offer protecting customers in the event that their car is vandalised. Our customers can feel reassured that in the event they have to make a claim for damage to their car that is a result of vandalism, they will not lose their no claim discount*.”
She continues: “The ad demonstrates this reassurance while retaining the warmth and charm people expect from Churchie. So it’s ‘Oh yes!’ to shameful tattoos!”
Emma Marsland, Managing Partner at WCRS, says: “We are delighted to have worked on the next chapter of Churchie’s crusade to rectify the insurance problems of the nation. You can always depend on the dog. Oh yes!”
The campaign was also worked on by animation specialists Blinkink and the media spots were secured by MediaCom.
Churchill’s vandalism cover comes as standard on comprehensive policies and now preserves customers’ no claim discount. And they won't just repair the damage; if you go to one of Churchill’s recommended garages, they'll clean the car inside and out too.