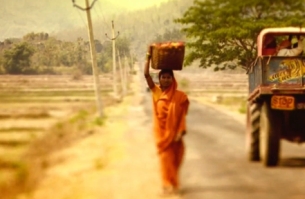 The TV advert, which promotes the charity’s annual fundraising drive, Christian Aid Week (10-16 May), aims to encourage people to download the app and make either a one-off donation or sign up to become regular givers.

The app works by sending out an inaudible signal to the viewer’s smartphone which allows them to make a secure donation in a matter of seconds by simply activating the app, choosing the amount to give, and tap again to confirm. The viewer is alerted to the ability to make instant donations by the PowaTag logo appearing on the screen.

Christian Aid Week is well known for its legions of volunteers, who have been going door-to-door to raise money to fight global poverty and social injustice since 1957, raising more than £11m last year.

This year’s Christian Aid Week is asking people to support women living in poverty around the world who are discriminated against from birth. Often forced into early marriages, deprived of an education and forced to spend hours fetching water and doing household chores, millions of women are subjected to violence and abuse because of harmful social norms.

Eleanor Ledesma, Head of Christian Aid Week, comments: “Christian Aid is very proud of its amazing volunteers who go door-to-door collecting money for some of the world poorest communities.  But as the way we live our life changes, more people living in flats and working longer hours, it makes it more difficult to reach everyone in just one week.

“We may be marking our 70th anniversary this year but like all charities we need to move with the times and embrace new technologies in order to make it easier for people with busy lives to donate at a time convenient to them.  PowaTag has great potential for the charity sector and we are delighted to be able to broadcast a world first with this innovative new advert.”

To boost fundraising Powa Technologies have pledged to match fund the first £10,000 donated to Christian Aid using the app and all of Christian Aid Week’s operational costs for using the system will be re-donated

PowaTag is a free mobile app available from the iTunes and Google Play Stores that enables users to immediately complete transactions with their phone or tablet in moments using pre-entered information, interacting with anything from products to advertising in print, online and in broadcast. The ad hitting screens from the 8th to the 16th of May will see Christian Aid launching a world-first in using PowaTag’s disruptive audiotagging technology in a television broadcast.

Dan Wagner, founder and CEO of Powa Technologies, comments: “PowaTag has made waves in the retail sector for its ability to enable instant purchasing, but our technology also has huge potential to help people support the vital work of organisations like Christian Aid. 62 per cent of people in the UK now have a smartphone, and most have them close at hand when watching TV, so mobile is the perfect channel to reach an audience of millions.

“Individuals feel a strong urge to get involved and donate when they see a TV appeal, but every second that goes by reduces the chance that a donation will be completed, especially if they need to fill in long forms. PowaTag gives them the ability to donate instantly with the emotional impact of the appeal still fresh in their mind. – I know I’d give more if it was this easy, and I’m sure this is true for millions of others. Christian Aid is the first to adopt what we hope to establish as a new standard in charity support.”

The advert, which can also be viewed on YouTube and works in the same way as the TV version, will be supported by PowaTag educational material across the charity’s website, social media channels, email and offline advertisements.

Eleanor Ledesma adds, ‘As an organisation that is also at the forefront of campaigning on global issues such as climate change and tax justice we are really excited about the ability of PowaTag to allow supporters to not only donate, but also to take an action such as signing a petition.  We are now looking at ways that we can incorporate the use of PowaTag not only into our fundraising but also our vitally important campaigns.’