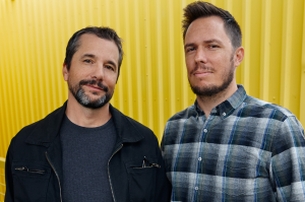 TBWA\Chiat\Day LA has announced that Chris Ribeiro and Drew Stalker have joined the Agency as Creative Directors. The pair has moved from fellow network agency (and Playa Vista neighbor) TBWA\Media Arts Lab. In their new roles at TBWA\Chiat\Day LA, Chris and Drew will be responsible for leading creative across all platforms for Nissan, a marquee global client that has been with the Agency for more than 25 years.

“Chris and Drew are real creative heavyweights, and their years spent crafting work for Apple has given them the kind of tactical design-led expertise that our team can benefit greatly from,” said TBWA\Chiat\Day LA Chief Creative Officer Stephen Butler. “We are lucky to have them in the house, and excited to put them to work.”

At TBWA\Media Arts Lab, the Chris and Drew worked on several groundbreaking Apple campaigns, including the critically acclaimed 2013 iPhone holiday spot, “Misunderstood,” for which they were awarded 3 Film and Design Lions at this year’s Cannes Lions Festival, as well as a silver One Show pencil, a gold Clio Award, and an Emmy Award for Most Outstanding Commercial of the Year.

Drew Stalker is a graduate of the Art Center College of Design in Pasadena, CA. He began his career as an Art Director at TBWA\Chiat\Day LA in 2005, working on brands like Apple, Nissan, Sony PlayStation, Pedigree and Harmon International. In 2006, he moved over to the newly formed TBWA\Media Arts Lab where he worked on iconic Apple campaigns like iPod silhouettes, iPhone and iPad. In 2009, he relocated across the pond to TBWA\Media Arts Lab in London, where he helped to jumpstart the office before returning to the West Coast headquarters in 2013.

Chris Ribeiro graduated from University of Oregon with a degree in Journalism. Before teaming up with Drew at TBWA\Media Arts Lab in 2013, he was SVP, Group Creative Director at Deutsch LA, working with clients like Dr Pepper, Snapple and Expedia, and helping to run and win several new pieces of business for the agency. Prior to Deutsch, Chris worked as a Creative Director at WONGDOODY, where he led creative for clients including Alaska Airlines and Carl’s Jr. Like Drew, Chris also spent a few years in his early career at TBWA\Chiat\Day LA, where we was a copywriter working on Energizer, Taco Bell and Kinko's.