Anomaly London and Riff Raff pair with Ed Morris to play on the story of a stranded Chris Rea on the Christmas of 1978, when Joan and her MINI came to the rescue 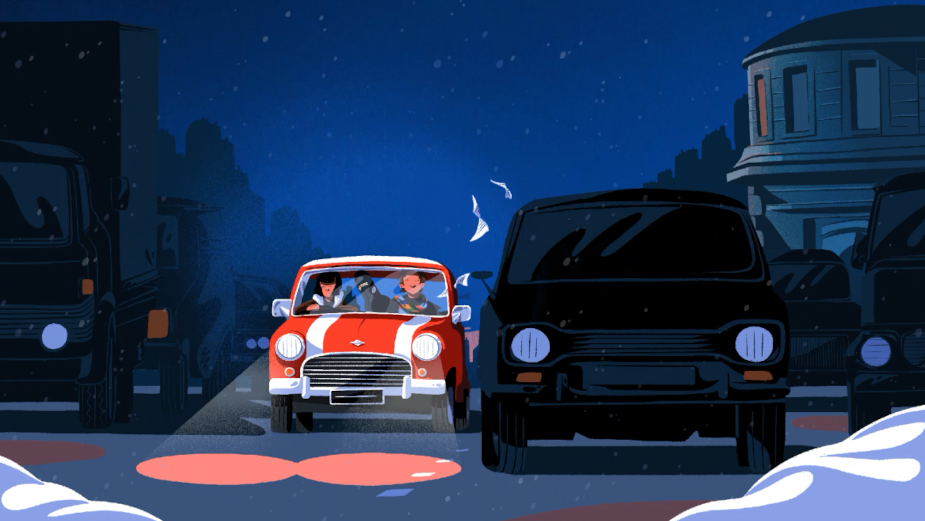 Anomaly London has teamed up with Riff Raff and director Ed Morris on a festive tribute to MINI, Chris Rea and Christmas. The 'Driving Home For Christmas' music video features real MINI drivers as they make their road trips to see family and friends, all set to the classic track from English songwriter.

The music video highlights a little-known fact about the song: On Christmas Eve 1978, Chris Rea was stuck in London and needed to get home to Middlesbrough. His wife, Joan, drove 250 miles to collect him in their black Classic Mini. As they journeyed back in the snow, inspiration struck, and so an instant Christmas classic was born.

According to MINI: "Chris Rea never intended to write a Christmas hit, and so the song was never released as a single, and there was no music video produced for it. Which is a shame because we think the song this good deserves a music video, and its connection to MINI meant that we wanted to give it one. So, we asked you, the MINI community to help us create a music video, a fitting tribute to one of the all-time Christmas songs, all with Chris’ blessing."

MINI shared the details of the story that inspired the campaign and led to the creation of a Christmas classic:

"Chris Rea was still a young and relatively unknown singer-songwriter when in the winter of 1978 he was faced with the prospect of a rather sad Christmas: he was almost out of his record contract and his manager was leaving him. Standing outside Abbey Road Studios, he was stranded in London, he couldn’t get back to his home in Middlesbrough, as the record company wouldn’t pay for his train ticket."

That’s when his wife Joan came to the rescue, making the 400 km+ drive down to London in their Austin Mini, to bring her husband back home. On their way back the snow began to fall and they were constantly stuck in traffic. Rea began looking at the other drivers and they all looked miserable to him, so he, almost jokingly, started putting down the words that would become his song. Song writing can really be that spontaneous, although we’d like to think being in a cosy Austin Mini helped."

After arriving home, and with only a few hundred pound in their pockets left, the Reas were preparing for a lean Christmas. However, waiting for them was a letter from PRS America that revealed that his song Fool (If You Think It’s Over) had been a hit in the USA. There was a cheque for £15,000 in the letter as well, which saved their Christmas."

The song would sit on a shelf for years before one day Chris Rea and his band were testing new pianos, when they came upon a tune that fit the lyrics to “Driving Home for Christmas” perfectly. They would add the familiar jazzy intro and Christmas carol-style arrangement later, and the song that we know today was born. It was only ever included as a B-Side on a different single, as nobody thought it would become much more than that. But after a few years, and without any marketing campaign, the song slowly became a bigger and bigger hit, re-entering the charts every year. Today it is considered a real holiday staple."