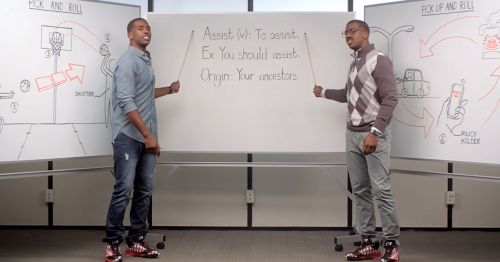 State Farm looks to the future with the latest chapter of the popular 'Born to Assist' campaign. "Future of the Assist," a new commercial, will air during the 2014 NBA Playoffs.

"Future of the Assist" centers on the important task of inspiring the next generation of great assisters, picking up where the campaign's previous outing, "Heritage of the Assist," left off. Having explored the history of the assist in "Heritage," "Future" finds Chris and Cliff Paul intent on passing down the ways of the assist to Lil Chris and Lil Cliff. The two younger Pauls, both played by Chris Paul Jr., prove themselves to be true prodigies. Lil Chris earns attention for his signature "alley-oop de doop," and Lil Cliff begins insuring tree-houses from his own State Farm "branch."

The spot ends with a special "Cliffhanger" cameo from Stephen Curry, the record-breaking point guard for the Golden State Warriors. Curry appears with a man who may be his own long lost twin, suggesting that a little assist goes a long way, no matter where it comes from.

“We’ve seen great success in the 2013-2014 NBA season with this year’s iteration of the ‘Born to Assist’ campaign,” notes Tim Van Hoof, State Farm AVP-Marketing. “The latest work continues to convey State Farm’s commitment to service from one generation to the next, and to provide the best value in the business. The work builds excitement for what's yet to come with our ‘Born to Assist’ story and ongoing partnership with the NBA.”

As "Future of the Assist" rolls out nationally, the new spot will be accompanied by updated digital banners, Clippers in-stadium activations, and integrations with top tier platforms and partners including NBA.com. The social content produced by Cliff Paul throughout the 'Born to Assist' campaign will follow the “Future of the Assist” plot, with special activations planned for the 2014 playoffs and finals.

Translation is the creative agency behind the ‘Born to Assist’ campaign.

Spot Title: “Future of the Assist”