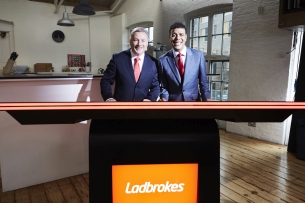 Content company The Moment and Ladbrokes have unveiled a series of new commercials which mark the climax of the football season and UEFA Euro 2016.

This is the start of an exciting new partnership between Ladbrokes and The Moment.

The campaign, which breaks this weekend (16th April), features Ladbrokes ambassador Chris Kamara alongside Scottish football legend Ally McCoist in a parody of the world of football punditry. Scripted by comedy writing duo Ivor Baddiel and Phil Kerr, the commercial sees Kammy and Ally deliver their own comedic brand of punditry direct from the flat of a Ladbrokes punter.

Running across major UK TV networks throughout the spring and summer, the campaign will take a continental twist when the European Championships come around.

The campaign is one of several exciting projects Ladbrokes have commissioned from The Moment this year, with the next appearing on screens featuring Ladbrokes racing ambassador Frankie Dettori.

Commenting on the campaign, Kristof Fahy, CMO at Ladbrokes, said: “Betting In-Play is a key area of growth for our business so we’re celebrating the product experience and positioning ourselves as a trusted favourite for recreational bettors. Kammy is a well-loved character of the football world so it’s great to have him back at the centre of our ad campaign, and Ally adds humour and recognition from our wide Scottish audience. The tone of the ad is fun and entertaining to engage our target audience. We’ll shortly have a new racing ad too featuring our latest recruit, Frankie Dettori.”

Ryan Reddick, Executive Producer at The Moment, added: “We are absolutely delighted to be working on this fantastic campaign with Ladbrokes. By tapping into the often absurd world of football punditry we’ve entered a space that football fans and a wider audience will recognise and enjoy.”