Watch out Zuckerberg - China's WeChat is aiming for world domination 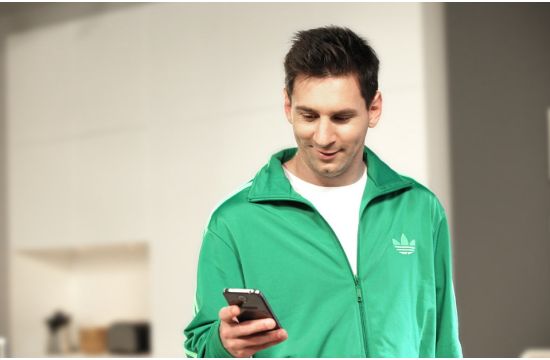 Both spots have a fatherhood theme. In the first, Messi is shown trading voice messages (in Spanish) with Grandma, who is trying to soothe his crying infant son. He gets the baby to laugh by -- surprise! -- performing soccer juggling tricks shown to the baby via WeChat's video chat function. The video posted on YouTube by WeChat India netted more than 1.7 million views after just one week.

The global campaign targets 15 markets, including Argentina and Spain where Mr. Messi is a superstar. The others are: Brazil, Hong Kong, India, Indonesia, Italy, Malaysia, Mexico, Nigeria, the Philippines, Singapore, South Africa, Thailand and Turkey. In addition to being posted on YouTube, the two spots will air on television in the 15 markets. There will be accompanying print and outdoor advertising in at least some markets.

"Our goal was to show Messi in relatable, down-to-earth scenarios so our audience could easily identify with him and his use of the product; versus building the more common, larger-than-life concept around him that only puts distance between him, the product and the consumer base," Stardust Co-Owner/Managing Partner Dexton Deboree said in a statement provided by Tencent. "The opportunity for Stardust was one that really allowed Stardust to rely on our unique strengths to tackle a large brands challenge. We worked hand-in-hand with the team at Tencent and WeChat to concept a campaign that would work for launching their product to a large number of new countries, around the globe, while utilizing some consistencies between other non-US campaigns they had done in other markets, all within a single campaign, all within very tight logistics in both the execution and deployment."

"We were intimately involved from beginning to end. Both cultural and time zone challenges presented hurdles we don't usually have to jump. In this case, I think it is the versatility of the Stardust team that allowed us to work across 3 time zones seamlessly," added Stardust Co-Owner and ECD Seth Epstein.

WeChat already has more than 300 million registered user accounts, including 70 million outside China, mostly in Asian markets. WeChat started as a messaging app similar to WhatsApp, but the addition of video calls, photo sharing, location-based services and other Social features also make it similar to Instagram, Facebook, Twitter and Skype. WeChat's popularity outside of China has soared recently, growing by 20 million registered user accounts to reach 70 million in only six weeks. The growth is attributed to promotional campaigns, special WeChat deals provided through some Asian telco operators, and the increasing number of smartphone users in target markets. WeChat has not officially launched in the U.S., though Tencent has an American office doing groundwork and studying the market.