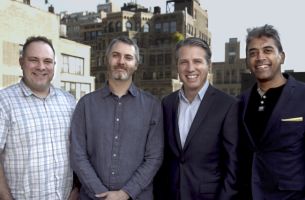 Chimney, an independent content company specialising in film, television, commercials, and digital media, has opened a new state-of-the-art facility in New York City. For over 20 years, the group has been crafting award-winning production and post for some of the world’s most recognised brands, including IKEA, Audi, H&M, Chanel, Nike, Suntrust, HP, UBS, and more. Chimney was also the post partner for the feature films “Chappaquiddick,” “Her,” “Atomic Blonde,” and “Tinker Tailor Soldier Spy.”
The New York opening is a major development in Chimney’s global strategic expansion efforts -- now with 14 offices worldwide -- following its founding in Stockholm in 1995.
“Launching in New York is a benchmark long in the making, and the ultimate expression of our philosophy of ‘boutique thinking with global power’,” says Henric Larsson, Chimney Founder and COO. “Having a meaningful presence in all of the world’s economic centres with diverse cultural perspectives means we can create and execute at the highest level in partnership with our clients.”
The New York opening supports Chimney’s mission to connect its global talent and resources, effectively operating as a 24-hour, full-service content partner to brand, entertainment, and agency clients no matter where they are in the world.
Chimney has signed on several industry vets to spearhead the New York office. Leading the U.S. presence is Marcelo Gandola, CEO North America, who brings extensive strategic operations and management experience for some of the industry’s most well-known companies. Gandola’s former experience includes Chief Operations Officer at Harbor Picture Company; Executive Vice President at Hogarth; SVP of Creative Services at Deluxe Entertainment Services Group; and VP of Operations at Company 3.
“Marcelo has a proven track record of building and growing businesses in rapidly evolving and often turbulent industries,” says Larsson. “Possessing an entrepreneurial mindset and strong leadership instinct is necessary to lead our teams. Marcelo has a vision, which is key to establishing, but also growing Chimney in North America.”
Award-winning colorist and director Lez Rudge serves as Chimney’s Head of Color North America. As a former partner and senior colorist at Nice Shoes in New York, he is highly regarded as a major player in the industry for his artistic talent and proven success collaborating with some of the world’s top agencies, directors, and DPs. He has worked alongside the likes of Spike Lee and Darren Aronofsky, and on major brand campaigns for Maybelline, Revlon, NHL, Jeep, Humira, Spectrum, and Budweiser.
Managing Director Ed Rilli will spearhead the day-to-day logistics of the New York office. As the former head of production of Nice Shoes, he has an impressive rolodex, producing major campaigns for such brands as NFL, Ford, Jagermeister, and Chase.
Sam O’Hare, Chief Creative Officer and Lead VFX Artist, will oversee the entire VFX team. Bringing experience in live-action directing, VFX supervision, still photography, and architecture, O’Hare’s interdisciplinary background has solidified him as a highly sought-after artist for photorealistic CGI production.
In addition, Chimney has brought on cinematographer and colourist Vincent Taylor, who joins from MPC Shanghai, where he worked with brands, such as Coca-Cola, Porsche, New Balance, Airbnb, BMW, Nike, and L'Oréal, among many others.
The 6,000-square-foot office will feature DaVinci/Resolve colour rooms, Autodesk Flame suites and a robust VFX bullpen, multiple edit rooms, a DI theatre, and a Dolby Atmos mix stage through a joint venture with Gigantic Studios.
view more - Creative