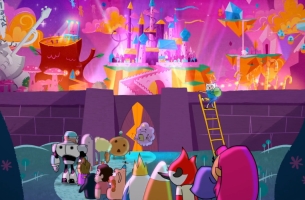 To create the promotion and packaging for its month-long stunt, Kingdom of Awesome, Cartoon Network Latin America tapped the talents of animation and digital production studio Awesome Inc. Charged with the awesome task, the company designed and animated a fantastic animated kingdom where all of Cartoon Networks princesses hang out. These aren't just any ordinary princesses, but the brave, rocking royalty from the networks popular shows, including Princess Bubblegum, Flame Princess, Lumpy Space Princess and Marceline from Adventure Time. Its where fun reigns  no wonder the boys want to get inside too.

"Our goal was to create a realm that was quirky, magical and visually enticing, starting with the aerial view of the spectacular kingdom," says Awesome Incorporated Lead Designer Craig Sheldon. "We designed it with a velvety palette and used layered 2D and 3D elements for a dense visual experience and journey through this royally fun land."

Awesome Inc's team recreated the signature animated characters based on high res art and intensive study - otherwise known as binge watching - to replicate them with authenticity within the narrative. 

"It was important that the characters would feel contained within the world and stand out," notes Ashley Kohler, Executive Producer, Awesome Incorporated. "We appreciated the Networks trust and collaboration, and are super proud of the project."

"We are happy to work with Awesome Inc. Once again, they have done a great job of understanding our network DNA, creating something that brings our Kingdom Of Awesome idea to life in a way that´s both visually exciting and fun for the ears" said Damon Pittman, Senior Creative Director, Cartoon Network, Boomerang and Tooncast Latin America.