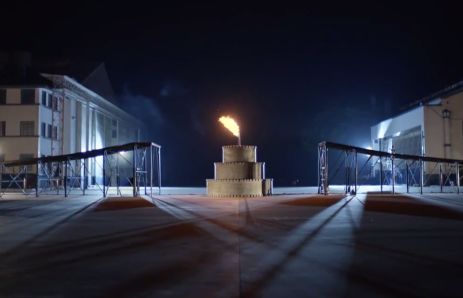 In an unprecedented activation, Chevrolet prepared a surprise in style for the fans of Camaro, which celebrates its 50th anniversary with the Camaro FIFTY. The brand prepared a stunt, which featured two radical jumps, to celebrate the half-century anniversary of the legendary vehicle.

In the first, the car 'blows out' a candle on a giant cake, after jumping at high speed.

In the second test, the Camaro jumps from a moving truck to another moving truck. During this automotive parkour, the 461hp V8 engine's roar and the incredible acceleration of zero to 100km/h in 4.2 seconds are highlighted; essential requirements to participate in such a test. The two films were created by Commonwealth//McCann Brazil with production by Volcano Hotmind.

"For the first time, we have launched a campaign for Camaro, our legendary car. The fifty-year-old brand and the Fifty commemorative edition deserved a strong message from Chevrolet celebrating our iconic car with innovative design and all the technology that only Chevrolet has. The campaign is the celebration of a legend," said Hermann Mahnke, South America Marketing Director at General Motors.

For the execution, Chevrolet invited Mike Ryan, one of the most respected drivers in terms of radical car manoeuvres to perform the stunt with his team.

Fernando Penteado and Eric Sulzer, South America Creative Directors for Commonwealth//McCann, admit the beginning of the shoot wasn't portentous. Production was delayed by five months due to weather conditions. "We could only perform such stunts with nothing less than perfect conditions in four days in a row," they said. But 2017 broke a 68-year record of rain volume during monsoon season (January to March). "Our hope was we could get luckier with the performance itself than the weather forecast."

"After the initial setup, the performance (including acceleration and braking) were tested on the ground while the stunts and the ramps and the trucks were projected using stunt drivers and engineering software. Everything had to be perfect because both stunts were too risky to be tried more than once. In the end, each stunt had months of prep and only one – successful – attempt."

Mike Ryan, the stunt coordinator, decided to drive the truck himself once he realised such a jump between two moving platforms had never been done before. "This stuntman with more than 30 years of experience shooting the most crazy things in Hollywood," said Fernando and Eric. "[And] it was the first time he had seen a jump like this with no post production and using real series cars."

"Camaro is an icon, born as a muscle car and now it’s an ultimate performance car," said the Creative Directors, explaining the inspiration behind their idea. "With these elements, we thought a 50-years celebration should bring the Camaro’s soul: adrenaline. Just like old times, when daredevils used to make people go crazy with amazing stunts with muscle cars. But now we decided to elevate these stunts to a level of sophistication that only a performance car packed with the latest technology would be able to do."