Creative duo will lead global campaigns at the Seoul HQ 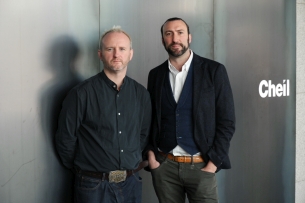 Cheil Worldwide, the global network encompassing McKinney, The Barbarian Group, Beattie McGuinness Bungay and iris, has appointed Dean Pinnington and Luke Ashton as Global Creative Directors. Dean and Luke join from their own companies, where they worked as creative consultants in London, UK.

They will be based in Seoul, and will help lead Cheil’s global creative. They report to Wain Choi, Global Vice-President Executive Creative Director of Cheil Worldwide. The appointments are part of Cheil’s push to boost global creativity across the network.

Luke Ashton began his career as a copywriter on McLaren Formula One. After becoming Editor-in-Chief of British American Racing Honda’s magazine, he joined up with Dean Pinnington whilst in London in 2005 and at 29, became one of DDB London’s youngest Creative Directors.

Dean Pinnington started at Ogilvy and Mather and Collet Dickenson Pearce where he worked on some of UK’s first integrated advertising accounts, such as Historic Royal Palaces, Honda and Isle of Jura Whiskey. Following this he spent many years as a creative consultant and produced Come on Britain, the country’s first-ever broadband campaign.

In 2008, they began working together as freelancers. Together they have worked at most of the major agencies in the UK, providing a wide range of creative services across Europe on global accounts, and won numerous international awards. Whilst at AMV BBDO, they helped the agency win Best Direct Agency at Cannes.

Commenting on the appointment, Wain Choi, Global Executive Creative Director of Cheil, said “I had the pleasure of working with Dean and Luke before. Most of the projects were demanding from a timing point of view and briefs were constantly moving. However they were always willing to find the best solution. I enjoyed their energy throughout the creative development process and their attitude towards great ideas, ‘it can always be better’. I am confident that they will be a great asset to my creative department”.

Luke Ashton added, “Cheil has projects that any creative in the world would want to work on. They are winning the big awards, because they ask ‘Wouldn’t it be great if we could do this…’ and then put all their energies into finding a way to do it. That’s what got us excited, as that’s the way we’ve always worked.

Seoul is a vibrant, electric city and working at Cheil gives you the feeling that you’re right at the sharp end of the cutting-edge. Having been creative consultants for a long time, we’ve had the fortune to learn from many different Creative Directors at many different agencies, so we aim to use this varied experience to get the most out of the talented teams here.”

Dean Pinnington also commented, “Cheil’s rise as an important player in global communications is perfectly in line with the attitude of a city that is thirsty to promote its ability to innovate and challenge conventional wisdom. It’s the appreciation of the past with a sense for the new, and the excitement of the what could be, that makes for genuinely exciting times ahead. I am ready to enjoy the journey with everybody in our global network”.

Earlier this year, Cheil appointed Malcolm Poynton as its first Global Chief Creative Officer to step up its ongoing strategy to evolve into one of the world’s most recognized creative networks.