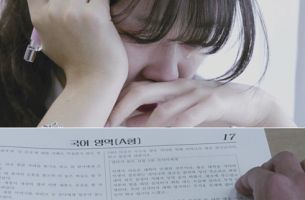 On the day of the Korean SAT (Scholastic Aptitude Test) last November, a short film was revealed on YouTube. It first shows students in a classroom taking an exam. Suddenly, one by one, the students burst into tears because of what is written on the exam paper.

The film is part of the ‘Healing Exam’ campaign created by Cheil Worldwide. High school students in Korea take countless exams to be prepared for their SAT and often wind up rating themselves based on those exam scores. Cheil teamed up with EBS, South Korea’s education broadcasting TV network, to encourage students by telling them that they are already perfect no matter what grade they get – with the help of letters from their parents in a form of an exam paper.

Usually starting at the age of 5, all the studying effort goes towards just one day; the day of SAT. It is not a surprise that students in Korea are unhappy. South Korea is ranked the lowest in students’ life satisfaction index among OECD nations as they suffer from stress and depression.

To embark on the campaign to boost students’ self-esteem, Cheil secretly contacted students’ parents to write a letter to their beloved son/daughter. The contents of the letter was inserted into respective student’s exam papers as an article, so the students could read them and write down their reply to parents as an answer.

The film follows the emotional changes of students during the Healing Exam. First they are surprised, seeming unable to believe their eyes, but then they start to cry. The passage contained messages from their parents such as, “It breaks my heart to see you come home late at night exhausted”, “You have done your best, so never regret”, “We’ll always be here for you”, “From your loving mom and dad.” The film’s total views exceeded 7 million in just two days.

After the exam, schools held exhibitions where the exam papers and answers written by the students were displayed. The trend of the healing exam spread across to other schools where teachers sent their messages of encouragement to students. Further extending the campaign, EBS added the related documentary video to its program on the topic of school education.

“Healing Exam project is about curing the stress caused by exams, with the exam,” said Sungjun Park, Creative Director of Cheil Worldwide. “We wanted to send a message to students who learn how to grade themselves even before they learn to love themselves, to cherish their lives more and realize that their lives cannot be judged by scores.”

“With Healing Exam project as an opportunity, I hope that students of South Korea realize the preciousness of family which is more important than test scores, and feel warm-hearted,” said Sungwook Chung, Chief Producer of EBS.

Watch the video here (Subtitles can be selected):